Last year, my doctor actually wrote a prescription for this bicycle. Yes, he did. He did write the prescription to "Mark" rather than a drugstore. We shopped around until we found one that we liked. It started out in the basement next to the treadmill. Seemed like a good idea at the time but there is a lot of dust and cat hair in the basement and I'm allergic to both. So on one of Glenn's visits home, Mark and Glenn lugged this thing up two flights of stairs and put it in the bonus room for me. This room now houses an ugly sofa (see in left of picture!). That sofa has made it through raising two kids and a million friends, a trip to Auburn where Laura used it in her apartment for two years, a trip back to Birmingham and back up two flights of stairs (where it got dropped on put a huge divot in the hardware floor :-). To the right of my bike is my wonderful scrapbooking and sewing space. The room is full to say the least. 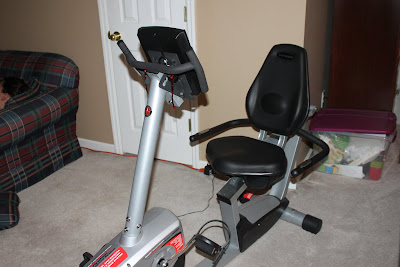 During Lent, in addition to giving up something, I always try to take on something. (I think I mentioned that in another post.) God gave me this body and I haven't always taken care of it so during Lent, I have committed to riding the bike a minimum of four times a week. I can't call this a "spiritual discipline" but it does take discipline. (by the way, I am spending more time each day during Lent - not just four times a week - in prayer and scripture reading. I've been riding the bike after work. I was late getting home last night after spending some time at the hospital with good friends and so Mark joined me in the bonus room. (actually he and the cat snuggled on the sofa while I rode the bike - he had already lifted weights for a long period of time and walked on the treadmill for about 45 minutes - he is ALWAYS disciplined - not just during Lent . . .and it shows!). Toward the end of my "ride in the park" (that is the name of the program), I was pedalling uphill and I was saying, "pedal faster, pedal faster" because I was trying to burn more calories. The program finished and I had ridden about five and a half miles and burned a whopping 120 calories. I said that out loud to Mark and he said, "isn't it amazing how few calories we burn???" Dang! I don't know about you, but I can inhale (maybe without eating!!) 120 calories in a heartbeat. Once again, I'm just a middle-aged mom trying to pedal faster and burn some calories!!