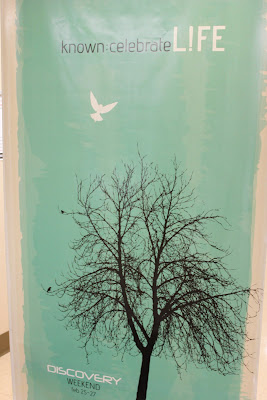 The weekend begins with dinner for the "Crew" - The "Crew" is all of the senior high students and all of the adult group leaders. We had pizza and salad. I snapped a quick photo of Tina (her husband is David - our youth pastor . . .Tina is expecting daughter #3 in April . . .and she was childless for the weekend) and Laura. It is so neat to be able to work a Discovery weekend with Laura!! 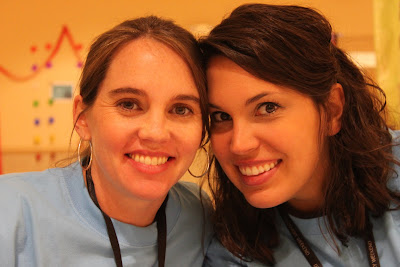 The jr. highs started arriving after dinner. Their parents bring them and they arrive with a sleeping bag, toiletries and change of clothes, etc. There are sr. high students and adults who greet them at the car as they arrive and carry their luggage for them. They were given a nametag and then they came to this station. They used a white paint pen to write their name around the tree. 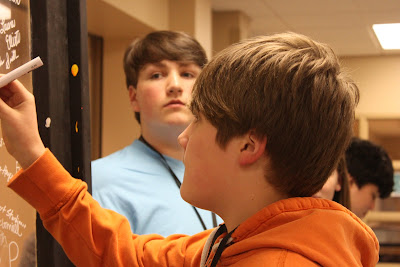 The tree was used later in the evening for a really cool presentation. (very similar to what they did at the Beth Moore conference - which I wrote about in December) 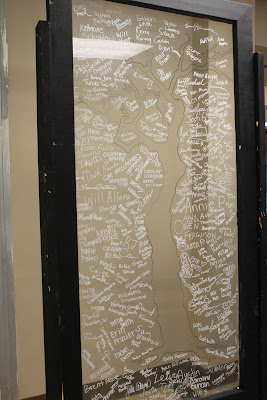 After they wrote their name on the glass, they had their picture taken and then walked through a line of cheering adults and sr. highs and entered into the gym which was full of giant blow up games and basketballs and cupcakes and fun. 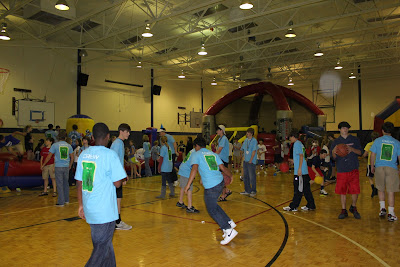 After playing for a couple of hours, we moved to the Haven . . .and crammed over 300 people into this room. We watched some videos and we sang some worship songs and we heard a talk. 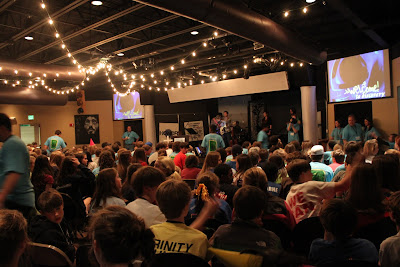 Then we divided into 34 D groups (small groups of jr. highs with a few sr. high leaders and an adult). We have a really large church with lots of spaces but in order to accommodate 34 D groups, we had groups meeting everywhere. Our group met in the balcony of Wesley hall. 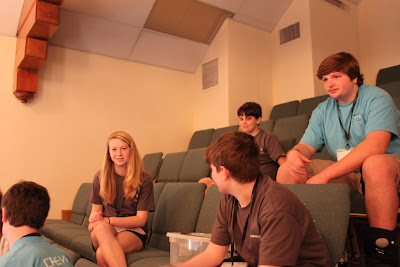 We met and discussed the talk and then all gathered back for a snack and closing. The jr. highs stay in the church in Sunday School rooms with adult leaders (different from the daytime leaders!!!!). The sr. highs spend the night in various homes. The daytime leaders get to go home and Laura and I crawled into our beds around 11:30 . . .we were pooped and it was only the end of day 1!!


Day two started at 8:00 a.m. with breakfast of biscuits and then we took a giant group picture and a fun picture of each small group. We moved back to the haven and heard some more talks and sang some more worship music and saw some more videos and had another snack. Then we all walked to the local middle school. While we were still at the church, a group of dads had gathered at the middle school to cook a lot of hamburgers and hotdogs on the grill. We spread out over the field with blankets and lunches and ate together. After eating our lunch, each group opened a package and there was a sheet of paper inside with a problem outlined. We were to brainstorm and come up with a solution to the problem. Our problem was an "inner city" school where the drop out rate was high and the paint was peeling in the school building and the kids didn't have enough to eat nor enough school supplies. DGroup 15 (that is who we were) decided to paint the school and build a basketball court and recruit adult volunteers and provide after school snacks and have a canned food drive. Patricia was drawing our poster for the canned food drive. 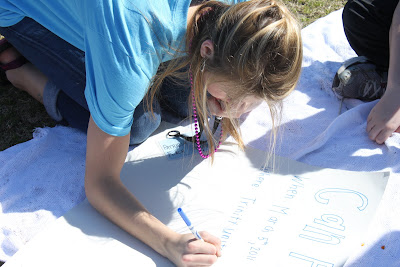 This was our D group minus David - he was already off playing football! (Look at the gorgeous blue sky - it was one of those perfect days). 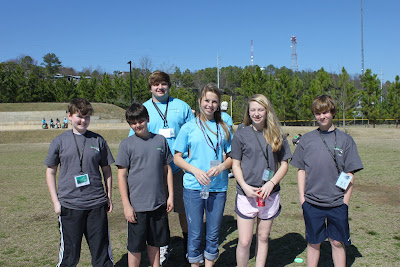 After the groups finished their projects, they had over 2 hours to play. At one point, I turned around and a group of girls was playing leap frog. 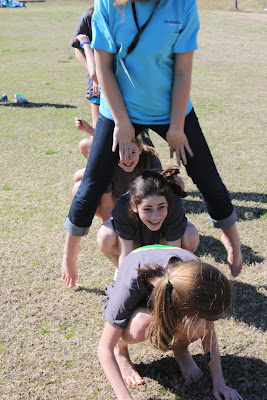 I also noticed a group playing "red rover red rover send so and so right over." That game got larger and larger!! I'm really glad that no one got hurt :-) 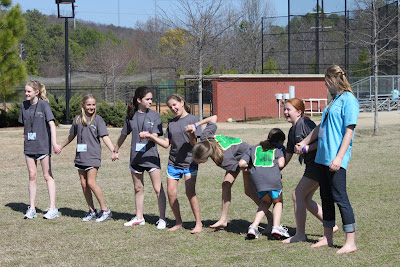 After free time, we walked back down to the church (thank goodness it is downhill back to the church - it was uphill all the way to the school - whew!) and heard a talk about forgiveness and then the students wrote their sins on flash paper . . .and we "burned" those sins up in a flash - God forgives us just "like that." We enjoyed a mexican fiesta complete with pinatas and then we went to the candlelight prayer service. Parents and friends lined the entire sidewalk from Wesley Hall to the main sanctuary and they also lined the aisle. So awesome. Afterwards there was time to pray and then time for a party. 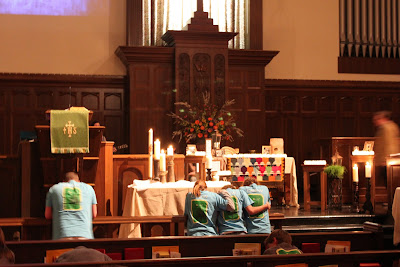 Sunday morning dawned bright and early with doughnuts from krispy kreme . . .matthew was enjoying his doughnuts. 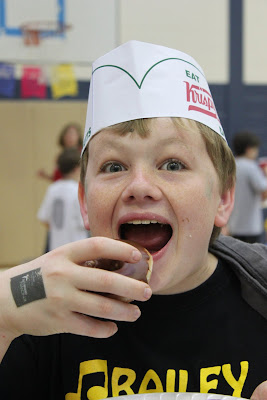 Julie Lynn was trying to get everyone to listen to her . . .we had to corral 300+ people into the scout bus, the church minivans and many, many cars in order to drive to Horses Horses. 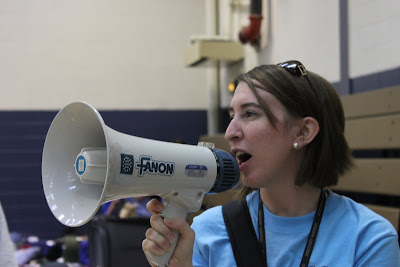 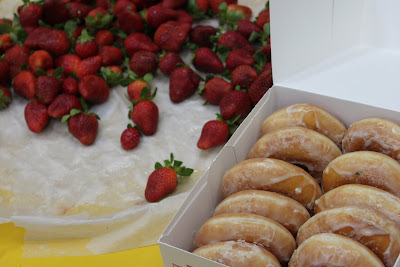 Now think about 300 kids with lots of dougnuts . . .we had not even made it onto the interstate when a kid threw up (thankfully, not in my car because if you know me well . . .you know I don't do well with throw up!!) Thanks so much to the Hayes family for sharing Horses Horses, their family farm with us. They even rented porta potties because there was no way that two inside toilets could handle 300+ people going potty multiple times!! The students were each given an ictus (ichthus . . .Christian fish) necklace and then they were given a bag of letters written just for them by family and friends. 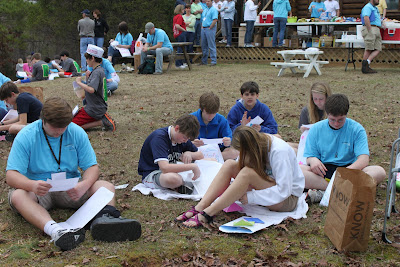 Laura's group was sitting right beside our group. I think she was grading papers while her group read their letters!! 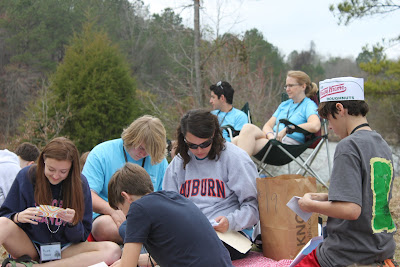 We worshiped together - we basically had "church" outside. Really good morning!! 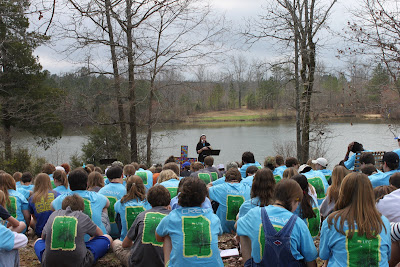 The worship group had poured up the grape juice for communion. Y'all know I love playing with the camera and I thought this photo of all those glasses turned out really cool. 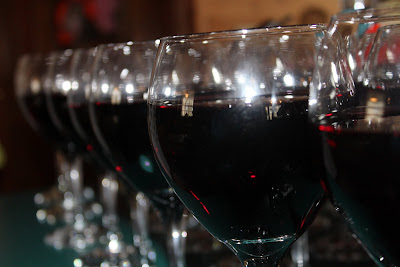 Lots of special moments happened during the weekend. Reed is one of the jr. high students. He has CP (he is a triplet!!). I loved watching the other kids with him. They were playing basketball and had huddled up to plan some strategy. 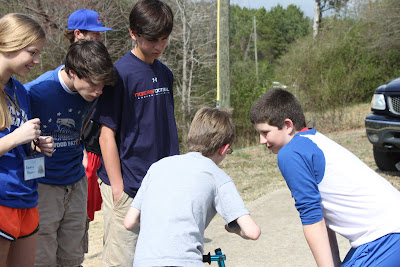 There was some dancing going on and some of the moms even got involved. There was a large group of girls dancing also but I thought it was great to see the moms. 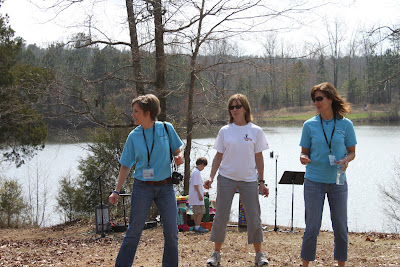 Discovery weekend is over for this year. Every year I wonder if I'm too old to do it again next year. This year, there was only one D group leader who was older than me . . .and he won't be working next year . . .so that means I might be the oldest one if I work next year. I always think I won't work but I love it so much that I work again. Discovery is a time when not only the jr. highs students experience "Aha" moments . . .but so do the sr. high students . . .and so do the adults. I love anything that brings us closer to God. I love participating in events that deepen our relationship with God and deepen our relationships with others. What a great weekend - what a GREAT God we serve!!
Posted by Lisa at 4:14 PM