Our Saturday was a crazy busy day. I got up before everyone else and made a giant pot of cheese grits and put them in the fridge. Mark and I then took Snuggles to the vet because he has been scratching big patches of fur . . .we've been finding hunks of fur all over the house. They checked for ear mites and they gave him a pedicure and they gave us some ear drops but they don't really know what is wrong with him. We drove home and Laura and I went to Target to get her eyes examined and then we went to Eye Mart to get some one hour glasses. It was such nasty weather - rainy and cold and yucky. We got home and ate a little lunch and then Mark and I had to drive in another direction to attend a surprise 70th birthday party for Jane. Mark and Jane have worked together longer than Mark and I have been married!! There were over 100 people at the party and it was lovely . . .except for sloshing through the mud in high heels. Jane's daughter-in-law is in culinary school. She is 50 years old and pursuing a new career. The food tasted good and was beautifully presented. Another culinary student made her cake and it was so pretty. We didn't have any cake at the party but Mark had some today at work and he said it was delicious! While we were still at the party, Laura put the pan of cheese grits into the oven for me. Mark and I rushed home after the party and changed clothes again and got ready to go to the other side of town for a Mardi Gras party. We covered a lot of miles on Saturday. We grabbed the grits, our beverages, the camera and whatever else we needed and drove to Vestavia to pick up our good friends. It was fun to ride together. My pictures from the Mardi Gras party are not that great but I thought that I would tell you a little bit about them. This is Rick and Jennifer. They are not a couple -both are married to other people in our Sunday School class. Both Rick and Jennifer have amazing stories. Rick was on an early morning bicycle ride with several other folks about 6 years ago. He and another guy from our Sunday School class were hit by an SUV and they were both in the hospital for quite some time. Jennifer had a massive stroke several years ago and almost died. I love this picture. Seeing them both at this party with smiles on their faces - Wow . . .amazing. 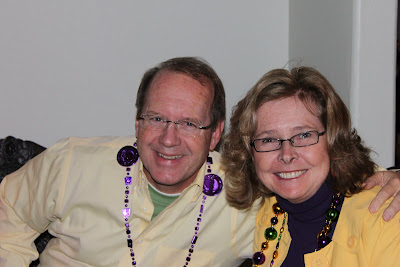 I don't know if you noticed . . .but nine times out of ten, I seem to catch Mark in mid-word . . .could be because he is always laughing and talking. Jolene is so neat - she is a nurse and actually left the party because she had to work. She is doing a study on patients with Parkinson's. She is a single mom raising two teenagers. 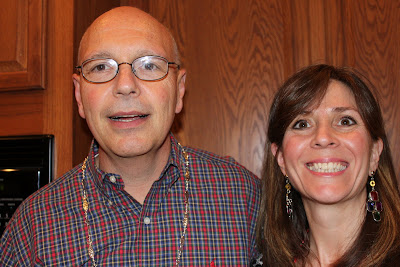 Let's see . . that is Francis in the purple and Debbie in the green and Lynn and Joe in the background. I was thinking about all the stories that go with all of these people. Lynn and Joe have a miracle in their lives also. Their little girl is precious. She is in the 6th grade and just went through confirmation class. There were major complications when she was born. MAJOR complications. Let me just tell you that she is a perfect miracle. She is cute and bright and funny and perfectly normal in every way. I still remember the day she was born and I remember seeing Lynn and Joe's faces . . . and not knowing what to say . . .and praying. 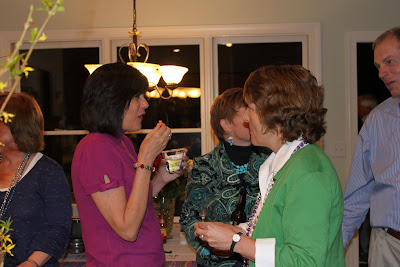 You know that I have to have a picture of some sort of food. This is the voodoo punch. YUMMY. Grape juice, pineapple juice, ginger ale and a little spirit. 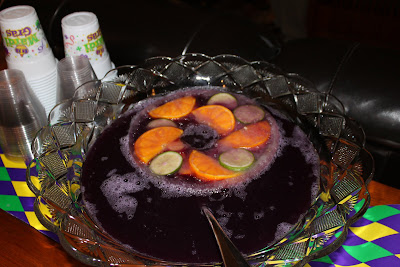 Butch and Mark look like they were "up to something." They must have been telling stories on someone. Butch and her husband, Roy are so special to our family. You've read about them on here before. Roy is the one who transported the wedding party from the church to the reception and Butch decorated the vehicle. They are so funny. Roy is actually a Cajun and he has read the Cajun Night Before Christmas at our class Christmas party. He can talk with that thick accent. 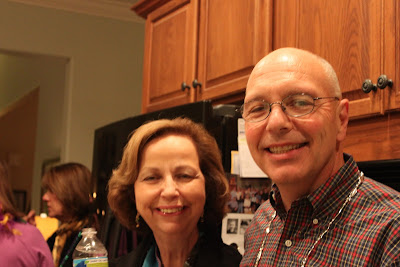 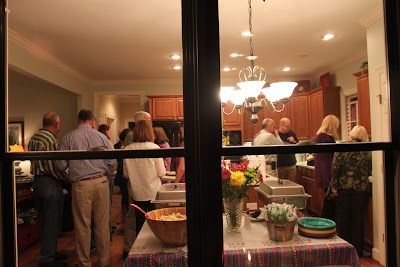 Look who was out on the porch - Billy, retired fireman; builder extraordinaire and Roy in the middle and Dean on the right. Just FYI - the bottled drinks were on the porch. 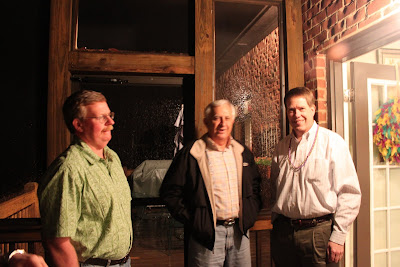 There were groups of folks all over the house. The food was delicious, the conversation was loud and happy . . .those things equal a great night. 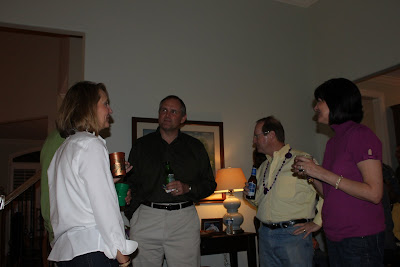 Who could this be? I told Jennifer that I was going to put this on my blog! I love it. Fun mask!! 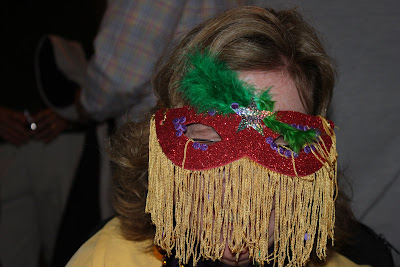 Roy with a great smile on his face and Dona with her big feather boa. 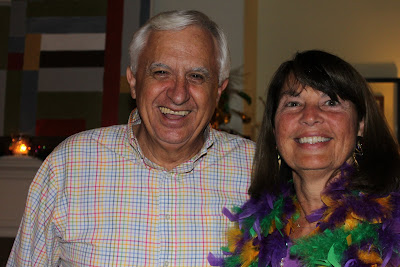 I was standing up on the stairs when I snapped this picture - trying to capture as many folks as possible. I think there were about 45 people there. You can see Mitch talking at the far back of the picture. 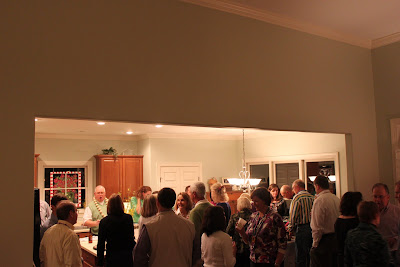 ok - funny story here. Mark is on the left and his identical twin brother is on the right. That is David in the middle and people are always thinking they are all brothers (they are not). Mark and George were born at 31 weeks - they were very premature. David was born on their due date . . .same year. Different parts of the country. David doesn't wear glasses but he borrowed some from someone at the party just so he could look even more like Mark and George. 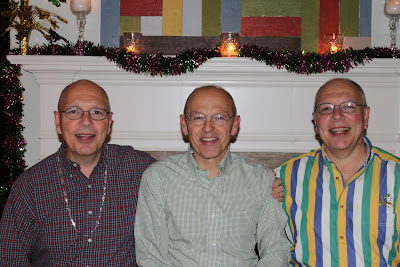 I forgot to tell you about the food - can you believe it? I always have pictures of the food . . .but I don't. We had gumbo and shrimp and grits and red beans and rice and good bread to "sop" up the wonderful sauce that was on the shrimp. We had a wonderful tossed salad and muffalettas. We had king cake and mounds cake and bread pudding and whiskey sauce. We had voodoo punch. We all did some serious eating!!
We give thanks for so many wonderful friends. We give thanks for a fun night!! Let the good times roll!
Posted by Lisa at 8:48 PM