We never win anything!

If I've heard those words once, I've heard them a bajillion times around our house. We never win anything. One year, we set out as a family to win the HGTV dream home. We bought postcards and sent those in. We registered online. We didn't win. I've always dreamed of Publisher's Clearing House showing up at my door with a giant check. We've never won. We've bought lottery tickets (when visiting other states) and we've never won. My sister has sent lottery tickets to my kids with their birthday presents. I can't say we've never won because our daughter did win $20 from the Texas lottery!

This fall, our daughter-in-law won BIG time. She won an all expense paid trip to London for five people to attend the red carpet showing of the new Harry Potter movie. I've seen her pictures and heard a little about the trip and she and her four friends were treated like royalty! She WON!

About a month ago, I received an email from Pappy & Co. They were having a sweepstakes. If you purchased a box of Bourbon Nib Brittle, you were entered into the sweepstakes. Mark loves all things Pappy so I thought, "why not?" especially when I read about the sweepstakes and it sounded like Willy Wonka. The winning brittle would contain a golden ticket! I thought that I would stash the brittle and put it in Mark's stocking or give it to him if he was having a bad day. When the package from Pappy arrived, I opened the shipping box and there was the brittle and a card that had "congratulations" written on it. I had not said anything to Mark about the sweepstakes so I emailed the folks at Pappy and said, "does this mean I won?" I promptly received an email back "Yes - You won!" I NEVER WIN but I won big this time! 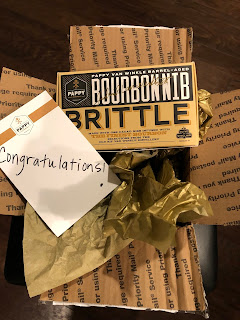 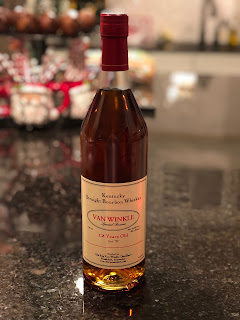 Not just any bottle of Van Winkle but a bottle signed by Julian Van Winkle III himself. (his signature is also on the brittle box!) 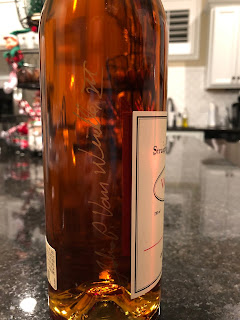 I won! I can't believe it! I won! I've made my husband a happy man! Hubby has asked me to enter any sweepstakes they offer!
Thank you so much Pappy & Co.!!  (Just FYI Pappy & Co is owned/run by women - triplets - you can read this article about them)
p.s. we've also purchased their bourbon balls - yummy!!
p.s.s. they didn't pay me to write this article - we won and I'm writing because I'm excited!

I got these questions from Sunday Stealing who stole this from a questionnaire on Swap Bot.  Yes, I am very aware that it is not Sunday but I'm off for the next few days and needed a writing prompt tonight!