yeah yeah yeah . . .I'm just a little behind . . .just a couple of months. I sure do miss having to make Halloween costumes. I NEVER thought I would say those words back in the days when I was slaving over red felt as I made a power ranger costume or pink slinky material that kept sliding off the sewing machine as I stitched a princess costume. Or wait . . .how about the year I made a Zorro or Vampire or something or other black cape for Laura's boyfriend who was six feet five (or more) inches tall? That was the biggest cape ever!!!! I miss it. Dang!! I miss it!!! This year, I had to borrow my friends children just to take a few pictures. This is the little girl of one of my friends . . .she is not dressed in her costume but she was Cindy Lou Who (is that how you spell her name?). Her hair is perfect!!  She came to visit us in the office and she was a willing subject for me and my camera!!! 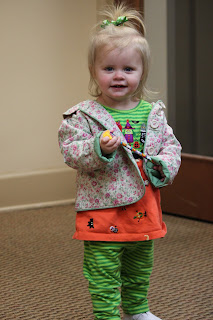 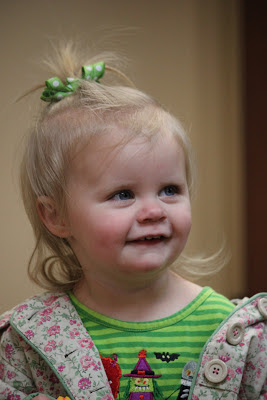 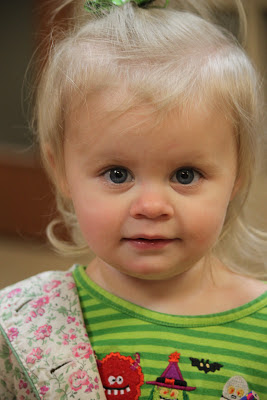 Can you guess who this is?  Indiana Jones himself!!  He came to visit us in the office and his whip made realistic sounds and he was quick to show us.  He had the leather jacket and the hat and the whip and the bag!  He was a great Indiana Jones!!!! 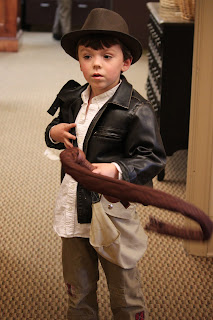 This is his little sister.  She was a cute pumpkin.  Don't you just love that hat?  It just makes me laugh every time I see it!!!  I've said it before - I love working with all of these young parents because they bring their sweet babies to see us in the office. 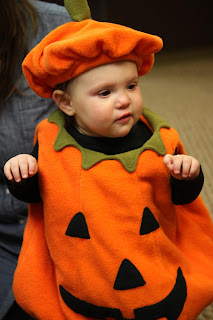 Here is a picture of Indiana Jones and his serious face.  He was all business in this one!! 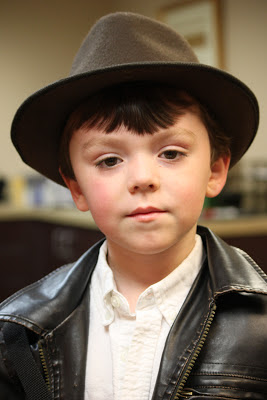 Here is Miss Pumpkin without her pumpkin costume.  She was too hot and got rather fussy but was rather happy when mama took off the costume. 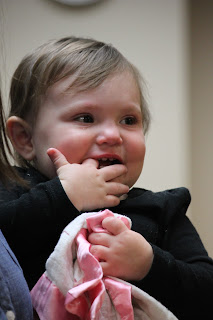 We had the grand total . . .drum roll please . . .of TWO . . .yes, count them . . .TWO trick or treaters and I almost missed them!!!  I was just pulling into the driveway from work and they were walking back home.  I don't believe I have ever seen a pink batgirl before but our next door neighbor sure made a cute one!!! 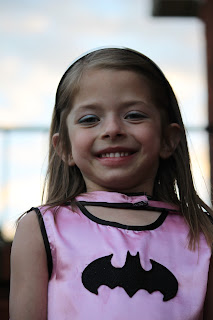 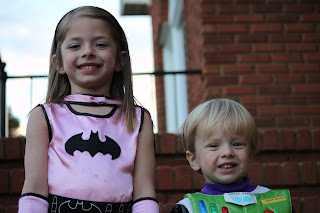 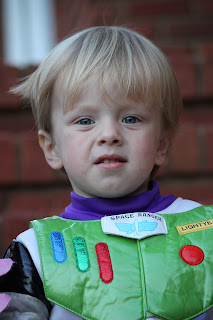 Later in the evening, our door bell rang and I was so excited because I thought we had more trick or treaters . . .but I opened the door and it was the mom and dad and teenaged daughter from across the street.  I tried to give them candy but they wouldn't take any.  They said that they were out walking from house to house and they were treating the neighbors.  They had home baked goodies and they were tied with ribbon and they had a nice scripture card on them - nothing pushy - just nice.  They know that we are Christians and they know that we host a Bible study in our home each week and we talked about that and about the fact that another neighbor hosts a weekly Bible study, too (thank goodness it is on a different night!!).  They didn't even say anything about the fact that they were treating the neighbors because they were Christians . . .as a matter of fact, I didn't notice the scripture on the card until after they left.  Isn't that cool?  What a neat way of sharing their faith without being all in someone else's face.

Oh we're so wild so wild about the wildcats . . .oops!

Wrong team!! My high school team was the wildcats. This team is the Patriots!! I was in the colorguard at my high school so when my niece, Grace signed up for her high school band, I was excited!!! I was finally able to make it to one of her games at the end of October. The husbands were at the farm so I met Alice at the stadium and enjoyed the game through half time (yes, I left after half time). To be honest, I did not do a lot of football watching . . .though the Patriots were playing better than our Auburn Tigers played this year. Alice and I chatted a lot and I ate a Chick Fil A sandwich from the concession stand - yes, they sold chick fil a sandwiches!!! I did a lot of people watching. That is always the best part!!! I also took a lot of pictures. I was excited to practice using my new big lens again. It is amazing that you can be sitting on one side of the stadium and take a picture and it look like you are right on the field. Doesn't take much to make me happy!!

I was trying to be discreet with my camera.  My niece is shy and quiet.  She isn't like me - loud and noisy - so I wanted to respect her and not embarrass her.  I want her to like me not hate me.  I kept trying to take pictures by aiming around the people on the row behind us.  This one is pretty good.  I guess I could have cropped out that lady's arms.  Oh well.  This is the south - look at how much jewelry that lady has on at a high school football game.  Don't you love it?? 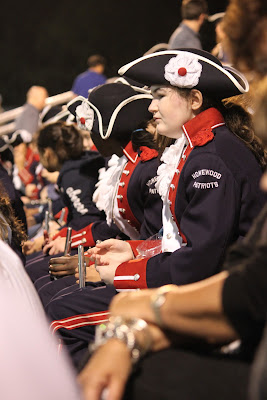 Just thought I would snap a few pictures of the players and cheerleaders.  I won't bore you with all of them.  The team colors are red, white and blue but since it was October and breast cancer awareness, the cheerleaders had pink pom poms (at least that is what I'm guessing). 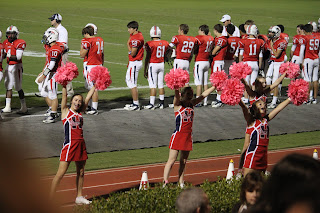 The band has four drum majorettes and two of them (I think that is correct) go to our church.  One of the Trinity girls made the Army All American band which is a huge honor and she will be playing on the field . ..well, I just googled it so I could tell you where/what game/parade and I can't find it but I promise it is a HUGE honor and she is going to be playing at something really important.  She plays the flute and has been playing in our church orchestra for years.  She is very talented. 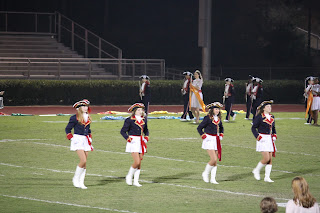 This is another way that you can tell we are in the south.  We have huge dance lines and this high school is known for their dance line.  Little girls start training from preschool to be a "spangle."  A friend of ours told about her daughter seeing the Spangles in the Christmas parade as a little bitty girl and being fascinated by them . . .and she is indeed a spangle now. 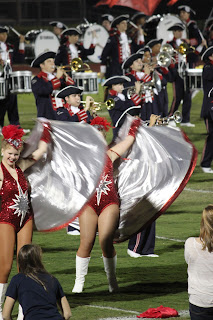 Grace is the last one on the row on the right (I think). 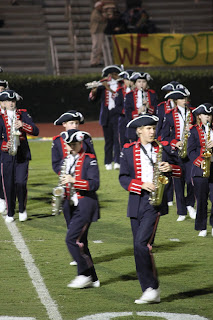 Here she is the last one at the back of the picture - right there in the middle. 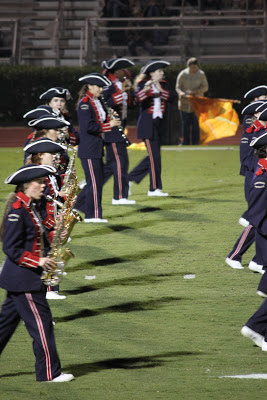 Here she is - last one on the row on the right. 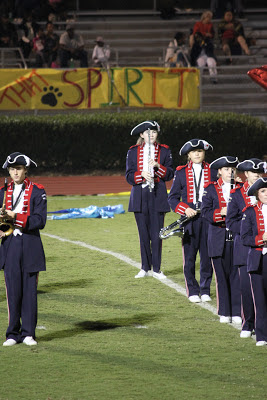 This is Laine - Kevin and Linda's (friends from Sunday School) daughter .. . .who just happens to be the little girl in the story above who quivered all over when she saw the Spangles in a parade.  I think she was about 18 months old!!! 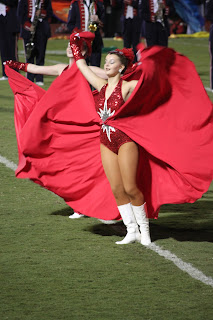 I've always had a thing for the drumline and they have a great drumline.  I always loved going to drum and bugle corp competitions back when I was in highschool!! 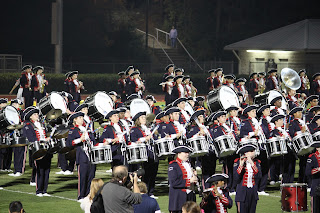 They have a huge band.  I think a third of the high school is in the band . . .then about a third is on the football team so you only have about a third to attend the games along with the parents. 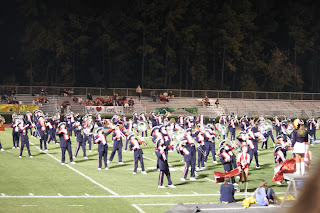 This is a better picture of Laine.  I don't know if you can tell . . .but the girls have on lipstick that matches their outfits.  It is some shade of Mac lipstick and it has some sort of glitter that is "food grade" in it and that lipstick matches perfectly.  Once again . . .only in the south.  I love it. 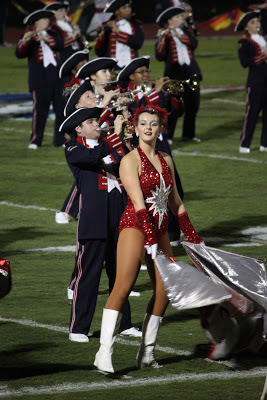 It was a fun night and I hope to go to more of the games next year. There is just something about Friday night football in Alabama . . .the smells, the sounds, the music - makes for a good night!!
Posted by Lisa at 4:01 PM No comments: