Several times a year, our Sunday School class tries to get together at local restaurants. Our class is actually very large and we have a couple of really big parties each year - usually one at Christmas and a Mardi Gras party and both parties are really well attended. For a night like this Friday night, we send out an email to everyone in the class and say something like, "meet us at Dave's pizza on Friday night at 6:30????" (it has to be a place that can seat at least 30 of us together) We call ahead to let them know we are coming (except this time they didn't have our reservation BUT I had my cell phone which still had the message that said, "This is Brent at Dave's Pizza calling about your large group . . .yadda yadda" on it!!). (I have to stop and tell you a crazy aside here. Mark bought a million pounds (not really but the back of the explorer full - probably 400 pounds??) of fish food last week to put in his fish feeders at the farm. These bags are large and he decided that he wouldn't unload them but he would leave them in his car until Saturday when he could take them to the farm. They smelled like funky dog food and his whole car smelled like that . . .and I already have a tendency to get car sick . . and we were driving fast because one of our friends had already called us to tell us that they didn't have our reservations . . .I thought we were going to have to pull over!!!!!!!) There are way too many parenthesis in that paragraph - just read it and figure it out - sorry! We finally arrived (and I didn't throw up) and we all stood out on the sidewalk while they figured out what to do with 30 of us. They figured it out pretty quickly and put us all down the side of the restaurant. Dave's has those cool roll-up/snap down kind of walls and since we are in the middle of spring here (even though it only arrived yesterday), it was a great night to be in an "open air" kind of place. This picture was taken from one end of the table. This whole place is eclectic. They have pendant lights and chandeliers and big screen tvs. 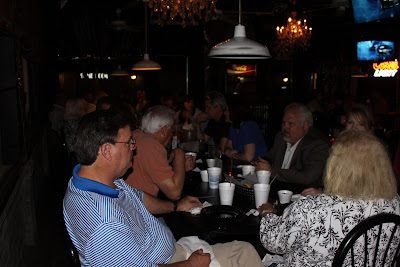 Here are just a few of the folks - that is Dickie and Sally and Scott and Bonnie and Roy and Butch on this end of the table. 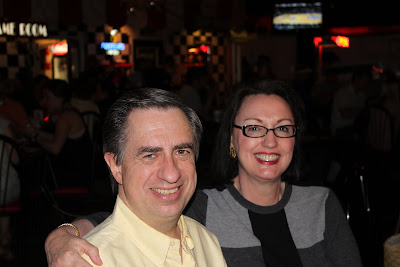 I walked down to the other end (because you certainly couldn't talk to the people way at the end of the table!!). Howard and Carolyn were on that end. 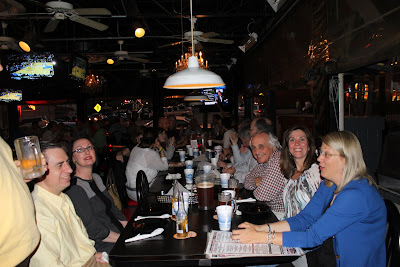 Let's see - we have Howard and Carolyn and Liz (her hubby was still at work) and Jolene and her friend, Rick. While we waited, it was nice to get up and visit and they brought baskets of the most yummy (and obviously fattening) garlic bread for us. 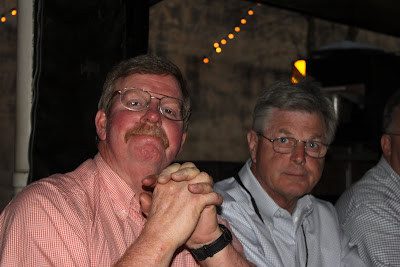 I love this picture of Billy and Gary. Pretty much sums it up. These two men would give you the shirt off their backs - good men! (and they happen to have great wives also!!) I know that Debbie and Jim were there and Kim and Gary S. but I don't see them in any of my pictures. 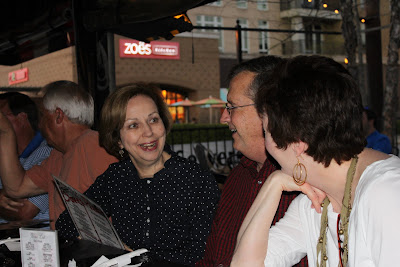 Butch was chatting with some of our newest class members. You can meet people on Sunday mornings and you can stand around and chat and drink coffee before class, but if you really want to get to know folks, you need to socialize with them (that is my motto and I'm sticking to it!) 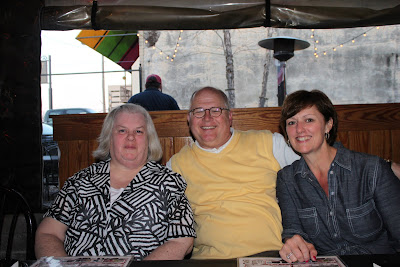 Here is Carolyn G. and Mitch and Donna. I sat right across from Mitch and I laughed so much that my face hurt. 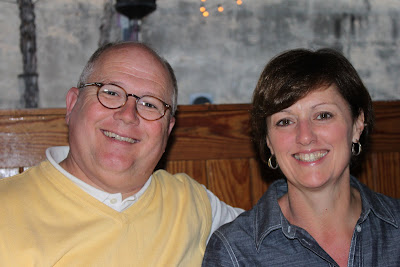 I love this picture of Mitch and Donna!
This is only a small group from our class but it was a fun night and I love getting to chat with everyone.
I have to end with a funny story. I drank two diet cokes that night and needed to . . .you know. So I went to get in line. For some unknown reason, Dave's only has one unisex bathroom. Why would you only have one unisex bathroom in a restaurant??? So the door was locked and this little voice says, "Someone is in here." So I waited . . .and waited . . .and waited. Then two teenaged boys came and got in line behind me and we waited. . .and we waited . . .and we waited. (and the wall is wallpapered with old tabloids - the headlines are like - baby survived after being flushed down the toilet . . or maybe that was puppy survived after being flushed - one or the other - I'm not kidding. The teenaged boys kept reading them and laughing. Some of the headlines were a tad risque - not bad . . .but you could tell that if I hadn't been standing there with them, they would have been rolling with laughter!!) Then Mark (who had more than diet coke) came to see where I was and to check on me . ..aww how sweet . . .and he got in line and we waited . . .and we could hear a couple of little children and a momma talking . . .and we waited. We finally got out of line and stopped at Mark's momma's house on the way home!! (probably way too much info and I know that this whole post has way too many parenthesis).
It was really a fun night with friends and good pizza!!
Posted by Lisa at 6:11 AM