I jumped over to grab the questions for Sunday Stealing.
1. Do you put ketchup on hot dogs? I love ketchup and I do love it on hot dogs!! I also like it on hamburgers and on fries. I actually buy Heinz ketchup with no sugar added because I don't want to feel guilty about eating ketchup.
2. How many TVs in your house? Inside the house are 2 TVs and then we have a TV in the garage, too. We've never had a TV in our bedroom (except once when I was recovering from surgery) and we didn't allow our kids to have TVs in their rooms. Mark always felt strongly that having TVs in all of the bedrooms encourages a family to spend less time together and he is right.
3. Do you put salt on watermelon? When I was growing up, we salted our watermelon and sometimes my husband salts his. He thinks it makes it taste sweeter? I actually bought a container of cut up watermelon yesterday because one of our granddaughters spent the night and she loves it. I have no idea where this watermelon was grown at this time of the year. Farmers grow watermelons in Alabama and around the 4th of July they are so sweet and juicy and yummy.
4. Can you swim? I don't swim well. My sister and I even took swim lessons as young adult women from this guy at the YMCA and I can still remember him shaking his head at us . . .and I think he had to save us a couple of times. Mark and our kids are strong swimmers and our oldest granddaughter is working on her swim lessons now and our daughter told me today that she has signed her baby up for a mommy and me class at the Y to get her used to the water.
5. Are your parents still alive? My parents have been dead for longer than I knew either one. Mark's momma will be 96 this year (do not tell her I told that on here!) and she has been a mother to me for longer than either of my parents were able to parent me. This was in August (she turned 95 in July) and she had baked 3 cakes for the birthdays of her sons! These aren't cake mix cakes these are cakes from scratch! 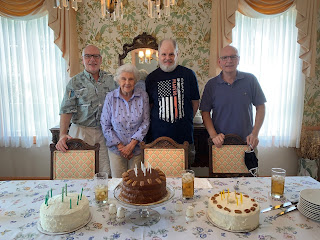 6. First car? My daddy bought a 1970 something (not sure of exact year) Mercury comet for us. Becky and I had to share a car. It was white with a rust colored top and I called it Vomit the Comet. I just googled 4 door comets 1975 and the two door comets were actually cool . . .but the 4 door not so much. I borrowed this picture from the internet. I couldn't even find a picture of a white one with that weird color top like we had. 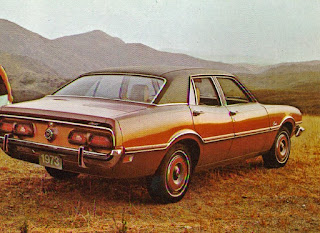 7. Surgeries? I've had my wisdom teeth removed. Before you say, "that is not surgery" just know that mine was. I was literally admitted to the hospital (St. Vincent's) and had the surgery and stayed over night. I kid you not. I had a C-section with our twins and then I had a hysterectomy at 42. The hysterectomy was my husband's favorite surgery because he said . . .and I quote . . ."they cut the meanness right out of her."
8. What do you drink in the morning? I have a diet pepsi almost as soon as my eyes open!
9. Can you do 100 push ups? hahahahaha! Nope. It would be cool if I could. I could probably hurt you you with my legs because those muscles are so developed but when it comes to upper body strength . . .I was evidently absent when they handed that out.
10. Can you change a tire? It seems like I knew how to change a tire at one time. I think my daddy taught me how. Of course, that was over 35 years ago and I haven't changed one since. I think I would have to pull up youtube and get instructions.
11. Tattoos? Nope. Daughter and daughter-in-law both have tattoos but I do not.
12. Do you wear sunglasses? This is so embarrassing but I can't wear sunglasses. They make me motion sick. I have tried cheap ones. I have tried expensive ones. I have tried mid-priced ones. I have tried brand name ones. None of them work for me and I have green eyes so I should probably be protecting my eyes. Yes, I have crinkle lines from squinting in the sun.
13. Do you have a phobia? I started to tell you no but then I realized I do! I guess this is a phobia. I freak out when someone throws up. I don't even like to talk about someone being sick. I don't like to throw up myself. I actually tremble if someone throws up near me. I freak out even when it is on TV . . .and why do they need to show someone throwing up on TV. That is not entertainment in any form or fashion.
14. Do you have a nickname? I don't think so. My daddy use to call me "hoss" - don't ask. We watched a lot of Bonanza back then. I'm "Gran" to the granddaughters. Mark just calls me "hey you" - not really!
15. Are you a picky eater? I don't think so. There are a few things that I don't like -- salmon croquettes . ..yuck. I'm not sure I could be polite and even pretend to eat them. I don't particularly like salmon - the real kind (over the canned kind you use to make salmon croquettes). Over this pandemic year, I've tried to learn to like salmon and I can get down a couple of bites and that is about it. I also do not like beets - in any form or fashion - pickled or fresh. They are such a beautiful color and I really want to like them but as Mark said about beet juice when we were in Israel, "it tastes like dirt" and I agree. I borrowed another picture from the internet -- beets are so pretty! 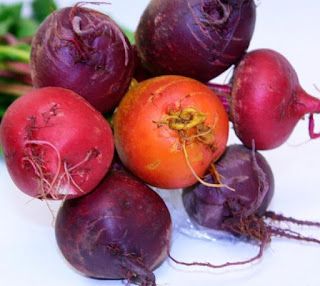