How many of you suffer from motion sickness? I'm raising my hand higher than everyone else! Cars, trains, boats, airplanes - all of them . . . yet, I can ride roller coasters (I haven't in years but I used to be able to do so??). So, I've tried various things over the years. Sitting in the front seat usually helps but I've actually felt sick a few times EVEN WHEN I WAS DRIVING. I kid you not. I do not kid about throwing up!

Back when our kids were in high school, I chaperoned all of their youth choir tours. We drove across the country to Colorado one year . . .on a bus . . .30+ hours. We had to change drivers somewhere in the middle because one driver wasn't allowed to drive that long. Before that trip, I was telling my ENT about my motion sickness and he prescribed a "motion sick cocktail." It was to take dramamine the night before traveling and then take a dramamine and an ativan about 30 minutes before leaving. I could take more dramamine and more ativan at the prescribed times if needed. I've been using this for years.

Fast forward to 2016. Mark and I had flown to St. Martin and Naussau. I had been on a cruise (lots of dramamine) back when I was young and had been to San Juan and some of the other islands but I had never flown 12 + hours. I went on my first trip to Israel and we flew to Houston and then to New York and from New York, we flew to Tel Aviv. That New York to Tel Aviv portion takes about 12 hours. It is a long flight. I did it again in 2018 except we flew from Birmingham to Chicago to New York to Tel Aviv. 2020 came along and we did Chicago to New York to Frankfurt Germany to Tel Aviv. That did shorten the long flight to two shorter segments. In October, Mark and I flew to Philadelphia and from Philadelphia we flew right into Dublin. In just a few weeks, we will fly to Rome and then we fly to Milan and we will be on a bus driving through maybe the Alps? I need to go look at the itinerary again. I've managed on all of the other trips by taking lots of medicine (motion sick cocktail) and by wearing the accupressure wrist bands and by chewing ginger gum, etc. I hate having to take so many drugs because it makes me drowsy and feeling loopy at times.

Enter my friend, Joe. He, too, suffers from motion sickness and he and his wife traveled with us to Israel and are traveling with us to Italy. He has found a new gizmo and he and I have both ordered one. I'm telling y'all about it now and will review it after the trip. We ordered them from Amazon. Here it is: 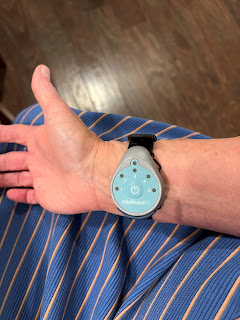 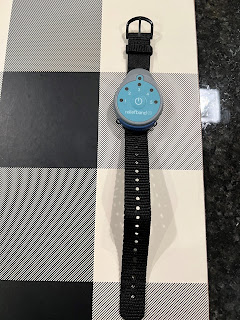 It is a Reliefband. It emits electronic pulses which somehow sends signals to the brain and supposedly really helps with motion sickness (or even morning sickness, etc.). Most all of the reviews are very positive.

Joe has tried his out in their car and it worked for him. We had to go to the funeral and other errands this past weekend and I did wear mine in the car while Mark drove. It could be psychosomatic or it could really work. I'll do a review in July!!

p.s. Amazon has no idea who I am other than someone who orders from them several times a month - I haven't received any compensation from them nor do they know I just wrote about them!