Friday was a work from home day so it was nice not to worry about getting everything together and rushing out the door. That has been one of the benefits of Covid for some of us - the ability to work from home at times.

Friday night was Mark's night to stay with his mom. It was COLD over the weekend and Harvey and I snuggled up while I studied. I've done well on the three "essays" we've had to write but I am really nervous about the first exam which is this weekend. I'm afraid my brain is too old to retain 3 chapters of dates and names and vocabulary words. I'm going to start saying, "I think I can. I think I can." 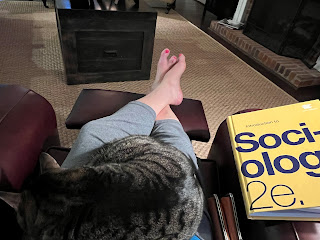 Saturday, I headed to my in person WW meeting at 7:00 a.m. and it was cold. This was on the way home. Skies were blue and temps were cold. Thermometer says 24 but wind chill was in the teens. BRR! 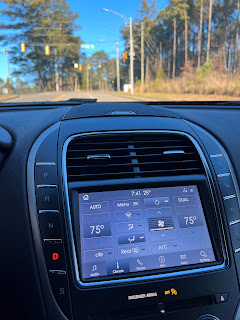 We hosted our supper club on Saturday evening. These people are family to us. One couple had to stay home waiting on covid test results and they were missed. 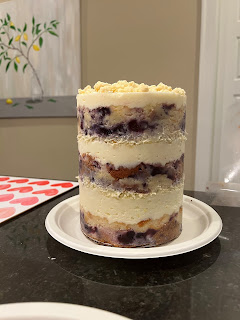 In our supper club, the host provides the main course and a few other things and everyone brings something. One friend brought the incredible cake pictured above. It is a Naked Cake (no outside icing) from Daughter's baking. I don't eat sweets but I was tempted to eat this lemon blueberry creation. Each piece needs to have all of the layers. That is one of the big Chinet plates so that gives you an idea of the size of the cake. 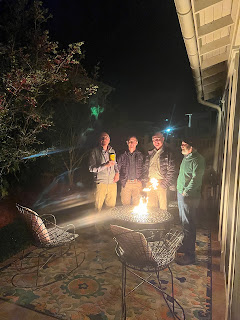 It was really cold outside but these guys were warm by the fire and warmed by the beverages. 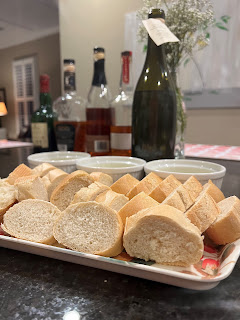 I mentioned this olive oil from Bottega in a previous post. We opened it and served it with crusty bread. 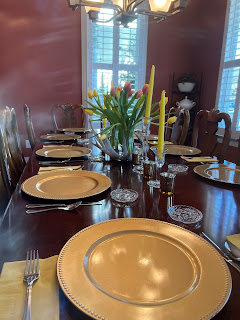 I loved my table. I'm usually my own worst critique but I really liked it this week. The tulips made me remember that spring is coming. 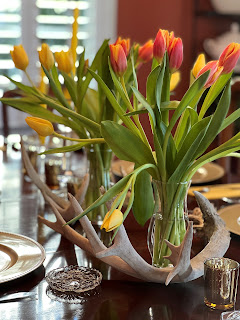 Mark brought those antlers home from the farm. These are "found antlers" -- not from a deer killed by Mark. I love the juxtaposition of the antlers with the dainty tulips.
A good time was had by all. Mark smoked a pork butt on the Pit Barrel Cooker and it was perfection. If you are in the market for a smoker, we highly recommend a Pit Barrel. Neither Daughters Bakery nor Pit Barrel are paying me nor do they even know me. I'm just linking in case anyone is interested.
Sunday morning brought a quick 30 minute work meeting prior to worship. Worship was just what I needed this week.  Our sister-in-law arranged the altar flowers and they were beautiful. We were wrapping up a month long sermon series on Generations which was also our stewardship and capital campaign month. Her altar reflected multiple generations -- her grandmother's cloth, an aunt's silver pitcher, a cousin's silver cup, the silver punch bowl from the United Methodist Women. It was amazing. 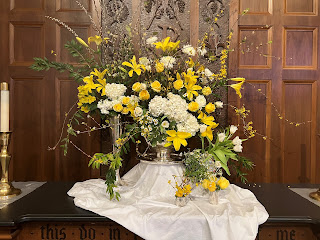 We headed to Mark's momma's house for some time to visit and lunch. I had planned to study but that didn't happen.
We headed downtown at 2:30 for a 3:00 show at the Lyric Theater. I copied and pasted this from their website just so you can enjoy the history. "Built in 1914 for B.F. Keith’s Vaudeville circuit, the Lyric is one of few theatres still existing today that was specifically designed to maximize the acoustics and close seating needed for vaudeville shows. Major stars such as the Marx Brothers, Mae West, Sophie Tucker, Will Rogers and Milton Berle played the Lyric. Berle said it was “as fine a theatre as any in New York.” During the 1920s, it was the custom to attend shows at the Lyric Theatre on Monday nights—if you could get a reservation. Tickets cost from 25 to 75 cents. In the summertime, air was fanned over two tons of ice a day to keep guests cool. Though seating was segregated, the Lyric was one of the first venues in the South where blacks and whites could watch the same show at the same time for the same price. (This note is inserted from me -- they have a door that says "historic colored entrance" and underneath is more information about that time.) The Lyric was once the finest performing arts theatre in the city and through its $11.8 million restoration, it is again. Listed on the National Register as part of the Birmingham Downtown Retail & Theatre Historic District, this century-old venue is a beacon of history, entertainment, and culture in the heart of Birmingham. The theatre offers a wider stage and closer audience—better suited for performing arts such as the symphony, ballet, opera and theatre. The Lyric should always be thought of primarily as a performing arts theatre and is an unequaled venue for live performances of all types."

The Lyric is directly across from the Alabama Theater where Mark and I went to see Christmas Vacation back in December. Both theaters have been restored and are beautiful.

We went to see Three on a String and the Dill Pickers. When I was young and single, I would go to the Lowenbrau Haus to hear Three on a String and when I had my "mid life crisis" which included buying a guitar and taking lessons (no, I can't play), I actually took from a guy who was a member of Three on a String at one time. The Dill Pickers -- let's see, one of them is a neighbor and in our Sunday School class and church. One of them used to be our neighbor. One of them is the father of one of our daughter's college roommates. My boss's father-in-law sang with them at one time. Three on a String music is not Mark's favorite music but I had a wonderful time and he was a good sport to sit through 2 1/2 hours with me. There was comedy sprinkled all through the show and Mark did enjoy that part. 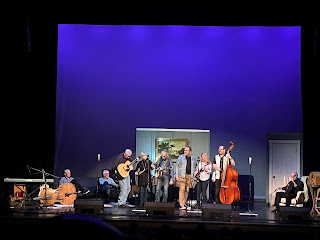 The first hour of the show was set in a "living room"
and the groups were "practicing" for their
concert.
During the intermission, they changed the set and
it became a "radio station" and the second half
was the "radio hour."

We saw lots of folks we know from church and walked towards our car with some folks we haven't seen in a while.

The icing on a perfect day was seeing this sunset as we drove home. This is not a fancy picture - it was taken through the car window but the sky was on fire and it was gorgeous. 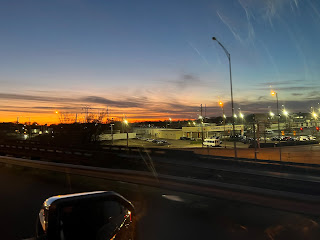