You might not know this about me but I have loved the Harlem Globetrotters since I was a teenager. Over the last few years, I’ve seen them play three times. Watching them gives me great joy and makes me belly laugh!!! For Christmas, Brian and Mollie gifted me two pre- show tickets and two game tickets for the Harlem Globetrotters’ appearance at Samford University here in town. The pre-game show was mostly for little kids but I enjoyed watching the players interact with them. 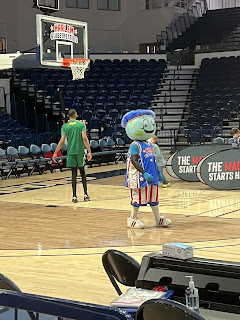 The first time I saw them play was at Samford and I purchased ONE ticket and went all by myself. I still sat there and belly laughed . . .even alone :-). 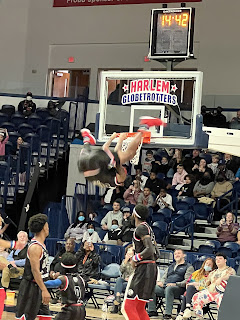 The second time was in Montgomery with Laura and Scott. They gave me tickets at Christmas and I guess we went to their game in January or early February 2020 right before the world shut down. 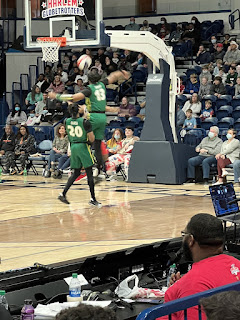 You might notice that Mark had not accompanied me to either of those games. 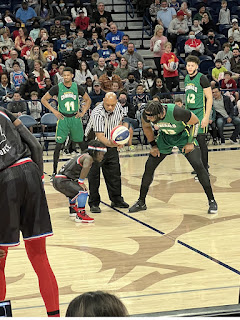 This time, he went along for the show!! More people arrived after I took this picture. The arena wasn't full but there were a good many people there. You can see in the above picture that there were people there. 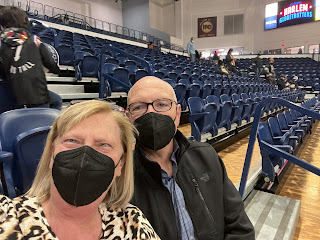 These pictures are in reverse order, I think. I wrote this blog on my phone while waiting at the allergy doctor! 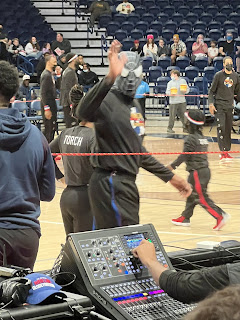 Ok - I love spider. He did quite a few moves that looked just like Spiderman. Just FYI, he was waving at the little boy in front of me but I am pretending like he is waving at me hahahaha! 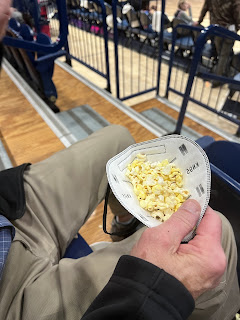 Mark and I took our masks off long enough to eat popcorn. Do you recognize his popcorn holder? He was using his mask as a temporary popcorn holder. I imagine it smelled good when he put it back on. 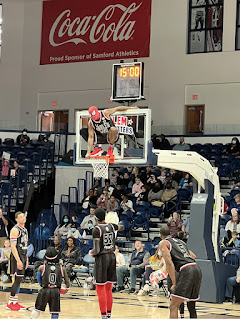 See Spider - he flipped himself off the goal.
I saved my favorite picture for last. 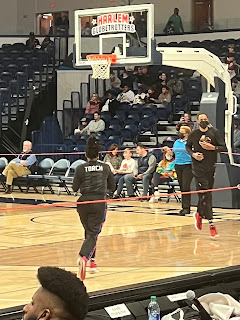 Torch is the female on the team. I LOVE the fact that there is a girl on the team and everytime she had the ball, I yelled loudly for her. This photo was actually in the practice time.
Have you ever seen the Harlem Globetrotters play basketball?
Posted by Lisa at 9:56 AM