I can't believe it is Friday and I haven't posted anything since Sunday. Since these posts are for "memory" purposes, I'll do a quick weekend and week recap. Last Thursday, over a week ago at this point, we had plans to meet 3 other couples from church for dinner at the Pita Stop and I was so excited to get some great hummus and pita bread and maybe even some falafel. Mother Nature had a different idea. It was pouring down rain and we were about halfway to the restaurant and my phone started screeching with tornado warnings. We literally drove off the interstate and turned around and went back home. Our safe place is the pantry so I was sitting inside the pantry and Mark was nearby pouring bourbon. We live in a place where tornado warnings are "normal" and we are in tornado season at this point. 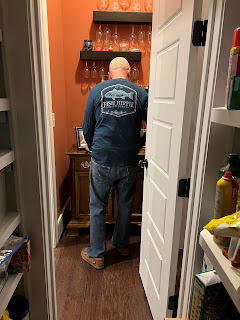 Once the threat passed, I had a grilled cheese on Keto bread -- not the same as good Middle Eastern food.
Friday brought work and studying and Supper Club. I was in charge of the salad and made a lovely one! 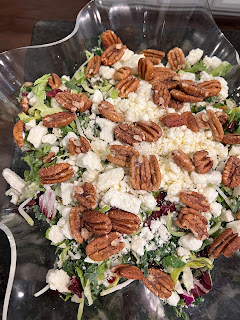 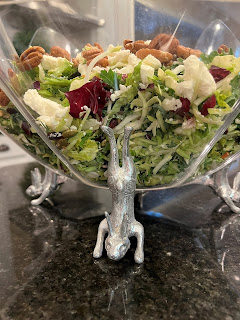 Our friends had a cute centerpiece . . .just FYI, it was the husband's idea! 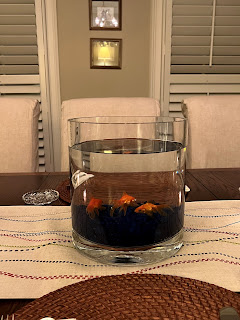 The menu was seafood gumbo so the fish centerpiece was perfect!! 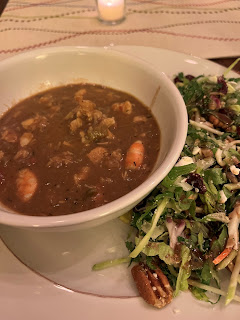 I went to Weight Watchers on Saturday and studied some more. I'm sure we did something but I can't remember. No pictures . . .it didn't happen :-)
Sunday morning found me filling the crockpot with all veggie soup for my lunches.
I did this before I went to church. Mark was at his mom's so I was on my own for church. 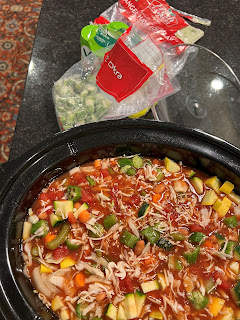 When I arrived at church, I saw these flowers on the altar. I knew there was a wedding the night before but I have never seen such a large arrangement of calla lilies and roses and hydrangea. It was spectacular. 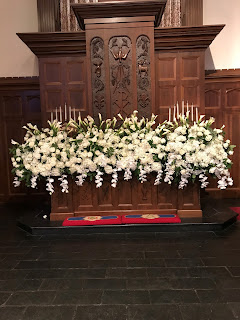 After church and Sunday school, I headed over to my mother-in-law's where we gathered as family around her table for Sunday lunch. Her memory is failing quickly but she loves having her family gathered around the table.
Monday was a normal day at work and then on Tuesday, I drove to Camp Sumatanga which is about an hour away. I love this place.
We met and worked all day Tuesday. We went to a local Mexican restaurant for dinner. The girls stayed in a cabin and we had so much fun that night. I laughed until I cried. 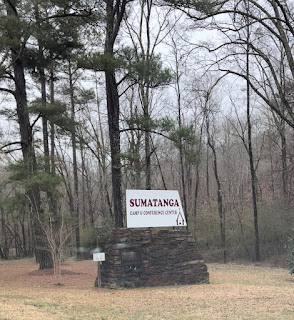 This is the United Methodist camp for the North Alabama Conference and it is the same place where we held our women's retreat back in October.

We woke up on Wednesday morning. We had brought breakfast food and put it in the oven. The guys walked up from their rooms (they didn't have a cabin) and ate with us. Everyone else arrived and we began meeting again at 9:00. I took this picture while everyone was eating breakfast. 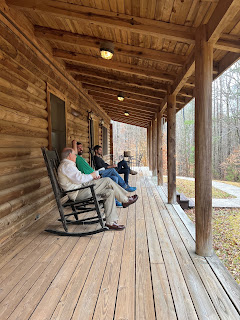 We came home late Wednesday afternoon. Thursday was a VERY busy workday after being away from the office for two days. I went into the office this morning to finish up everything . . . and now we are
at the weekend again!
Posted by Lisa at 6:26 PM