Our weekend started on Thursday night when we attended a play, The Odd Couple, at a local theater. We have season tickets and this one was hysterical. Our only problem was that we had been up since 4:30 and it was hard to stay awake. The play was FUNNY so the laughing kept me awake but I'm pretty sure Mark snoozed through a large portion of the play. The Homewood Theater had moved into a new space TWO WEEKS before the play. It is amazing that they were able to get it ready in time. Our good friend, Marietta, was the director and she did an awesome job. Oscar and Felix were played well by the local actors as were the other characters. 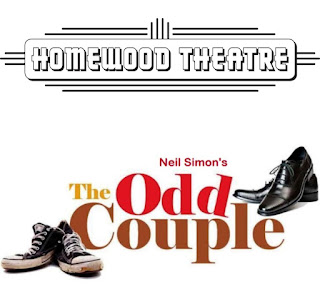 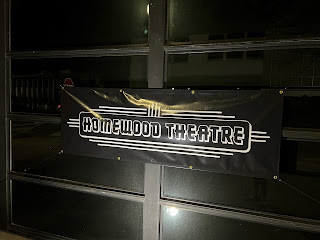 Friday morning I worked from home. Mark and I did a quick costco run at lunctime and we dropped his truck off for a new bedliner.

We had to go back and get the truck at 4:45 and we met our daughter-in-law and granddaughter #1 in the parking lot to do a trade. Sweet granddaughter came home to spend the night with us! She was acting silly while we ate "dinner" (lunchable). She had moved on to dessert. Have y'all seen these tiny ice cream cones (box picture below)? My 96 year old mother-in-law loves them as does our 5 year old granddaughter :-). 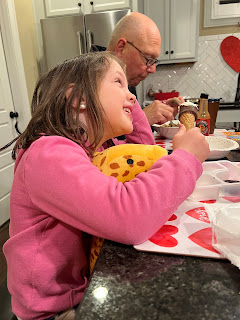 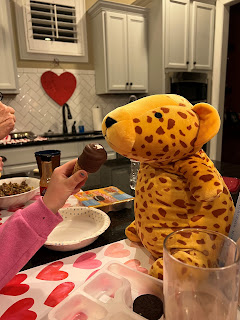 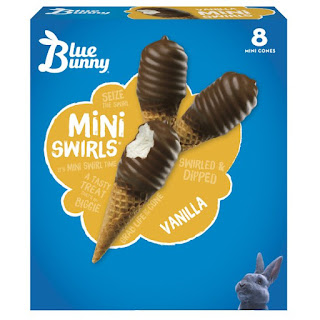 Saturday morning found us up at 6:15 and we started the day with bacon (she loves bacon) and Encanto. Have you seen Encanto? It is sooooo good! We had to be at a community center about 30 minutes away from our house by 8:50 because she had to . . . .

CHEER!
Saturday afternoon found me studying at the dining room table. I also answered some work emails (and drank several diet pepsis). Mark ran a couple of errands and we started a giant pot of soup and he did some yard work. Of course, while I was studying the washer and dryer were both working away, too. I also took a much needed nap. 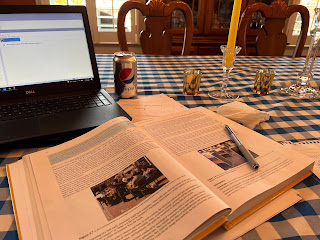 Saturday night, I cooked fresh shrimp (one of Mark's earlier errands was to go to Snapper Grabbers for shrimp), grits, and asparagus. This was our early Valentine's dinner because I'm going to be working on Valentine's night. 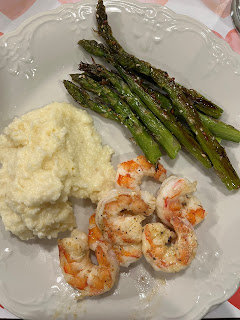 The alarm went off at 5:00 on Sunday morning and I rode the bike and we got ready for church. We went to early church and then Sunday school. I didn't have to teach and it was wonderful to sit and listen to the lesson. After church, we stopped at the Walmart Neighborhood Market to grab our Keto bread. Mark also needed half and half and they were TOTALLY OUT of cream - as in zero on the shelf. No big ones; no little ones; no regular brand; no Walmart brand -- no half and half.
We headed to Mark's mom's for our Sunday lunch and my sister-in-law made yummy Gumbo and salad. She also made a homemade coconut cake which is my son's new favorite cake.
We went back to our house and I did two loads of laundry while I studied. I think Mark exercised - he was out in the garage (which is very nice!).
At 6:25, we hopped back into the car and headed a few streets over to a neighbor's home for dinner. We could have walked but we were carrying all sorts of stuff and it was really too cold to take the golf cart. I've mentioned our neighborhood supper clubs that rotate monthly. This time we were with one couple that we met at a previous supper club but the other two couples and the hostess were all "new friends." I am really enjoying meeting new folks. The hostess, whose name is also Lisa, served lasagna and chicken tetrazinni and I took a huge salad. One of the other couples brought bread and the other two couples brought a charcuterie board. Somehow, no one signed up for dessert. We watched a little of the super bowl but mostly ate and talked. I didn't take a picture of the food or of the people but I did take a picture of her flower arrangement on the island. This dough bowl holding the arrangement was huge - 3 feet long, perhaps? 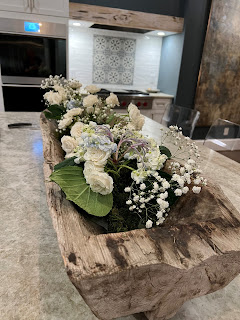 When we got home, I was too wound up to sleep so I read for a while. 5:00 a.m. Monday morning came WAY TOO EARLY. I actually buried my head under the pillow and said to Mark, "Mommy, I want to stay home today." Just FYI, I got up and exercised and got ready and showed up for work.
All in all, it was a great weekend -- busy but fun.
What did you do this weekend?