Last weekend, Mark and his twin brother, George, went on a three day hunting trip.  They had an excellent weekend - Mark killed a buck, George killed a doe, and Mark killed a hog.  Mark and George do not like sending their meat to a processor because evidently your meat has the possibility of being mixed up with someone else's meat . . .and everyone doesn't field dress as well as our guys nor take care of the meat as well as they do.  Everyone in our family LOVES venison except me.  Both Glenn and Laura texted and said, "I want some meat!" During the "ice and snow" event last month, Mark did cook venison cube steaks and he made gravy and I did eat them and they were tasty.

In our old house, we had a full basement and Mark could set up shop down in the basement.  He and Glenn made lots of sausage down there a few years ago.  They could spread out. 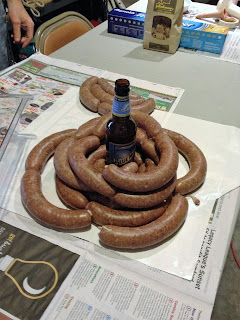 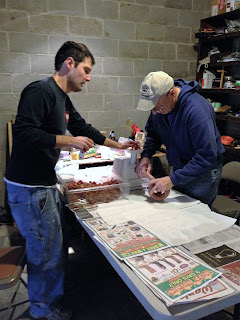 In this house, we had a two car garage . . .no basement.  Mark figured out a way to process the meat!  He set up shop in the garage.  He even hung lights overhead (like he did in the attic!) so that he could see better.  After he finished, just FYI, he cleaned the basement again from top to bottom and everything is so neat and clean!! 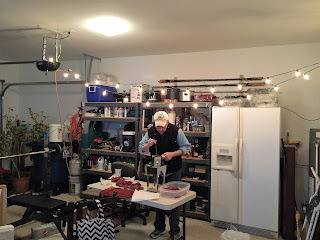 He borrowed George's cuber and made cube steaks with a lot of the meat.  I think I'll try them again when he offers to cook them for us. 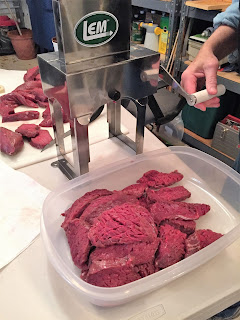 Mark only kills what we can eat.  We includes Laura, Glenn and Lauren, George & Alice, etc.  He enjoys just sitting in the woods and watching the animals, too.  I think it is so funny that he can sit still in a tree stand when he can't sit still at any other time!