Mark is away on a hunting trip with his twin brother, George.  They left Thursday after work and they will be home today.  I was thinking about blogging (I missed yesterday - so disappointed in my self of not meeting my goal of blogging every day for a month!!) and I thought of the old phrase "Hunting Widow" so I looked it up on trusty Google.  Urban Dictionary says, "hunting widow

A state of complete physical and emotional abandonment caused by the husband's preference to hunt animals in the wild for days on end instead of spending quality time with his wife at home."  I read that and laughed out loud.  The cat looked at me like "what is wrong with her?".

In May, Mark and I will celebrate our 33rd wedding anniversary.  He was a hunter when I met him and is still a hunter.  He picked me up for a date in his car that smelled like skunk scent.  Of course, at the beginning I had no idea what that smell was - whew!  Thank goodness, we had been dating since July of that year and that was not a first date!!  He went on a three day hunting trip the weekend before Laura and Glenn were born . . .they were born on that Tuesday . . . immediately following his return . . .six weeks early!  He said I was punishing him because their birthday ALMOST always falls on the opening weekend of deer season.

Mark is happiest when he is either hunting or fishing.  The man likes to be outside.  He is miserable without some outside time.

I'm not one of those folks who gets all bent out of shape about being a "hunting widow."  I must admit that when the kids were little, it was tough.  Sometimes over the years it has been tough on my social life - having to turn down invitations to dinner, etc.  For the most part, I enjoy the time.  I watch as much HGTV as I can stand.  I read without feeling guilty!  I order pizza (he doesn't like pizza!).  I stay up late and sleep late and leave my pajamas on as long as I want (the pj's - sign of laziness in Mark's book!).

On Thursday night, I got a pedicure.  On Friday, I had lunch with friends and that night, I had dinner with this cutie and her parents. 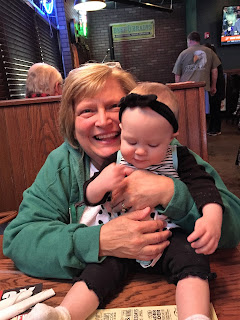 On Saturday, I worked on my Sunday school lesson in a totally quiet house!  I made the rounds of Costco, Michaels, Walmart, and Walgreen's . . .and I ordered aforementioned (BIG WORD - DOUBLE POINTS!) pizza for dinner!  Now we are already to Sunday and I'm teaching Sunday School and serving communion and then he will be back.  AND I'll be really happy to see him!

This fellow - Harvey - has really missed Mark.  He is a rescue and loves attention. 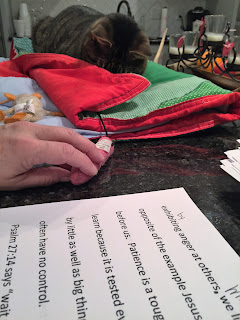 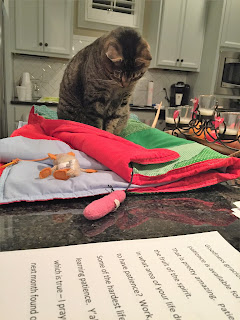 I finally gave up and made a pallet on the island and allowed  him to sit with me.  I'm not a proponent of animals on tables/islands/stoves etc. but he has been so pitiful.  I was working on my Sunday School lesson again this morning and I had to play "worm" (Mark's name for the game) with him with one hand while working on the lesson with the other hand.

Being a #huntingwidow - not so bad!  Really!!  (p.s. - I know he got an 8 point buck and a hog and he got to eat soul food at a local restaurant . . he loves fried chicken and greens and grits.  He called yesterday and was a happy man!)