April A to Z Challenge: P is for Parade; Palm Dates; Pilgrims; and Pool of Bethesda

Continuing on with the April A to Z  Challenge!


P is for Parade
When we were in Israel in 2016, we were excited to see a Bar Mitzvah Parade. I remember feeling caught up in the excitement and wishing that we could go with them to see what happened next. Today, I googled Bar Mitzvah parades in Jerusalem and found this site – it is a big business. 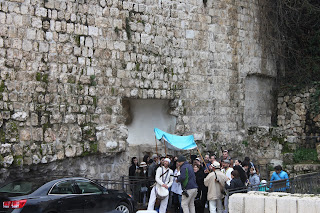 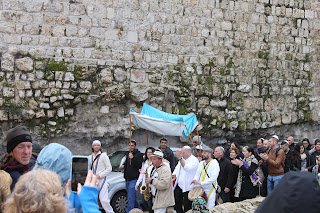 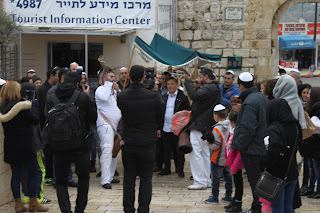 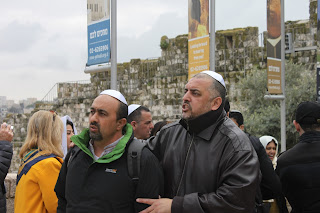 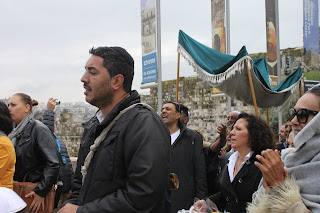 P is for Palm Dates
This is the headline from a magazine article found online and a brief paragraph from the article. Let me just add my two cents worth – the dates from Israel are indeed VERY TASTY! I ate a few while there and brought some home – yum!
Hot Date: Jordan Valley Growers Conquer World’s Medjool Market
These days three out of every four of the prestigious cultivar eaten globally are harvested from date palms in the Jordan Valley.
A large number of date varieties are sold all over the world, but Israel now is the major exporter of one of the large, soft and relatively expensive medjool, considered the king of dates all over the world. The date is grown in the Jordan Valley both in Israel and the West Bank and in the Arava desert. Supermarkets that refuse to sell the dates from the West Bank, for political reasons, receive dates from the Arava.
Out of 40 tons of global annual medjool consumption, Israeli farmers produce about three quarters, according to data from the “Date Desk” of the Israel Plants Production and Marketing Board. In other words, Israel produces some 75% of the entire world production of medjool, though other Israeli groups put this at closer to 65%. 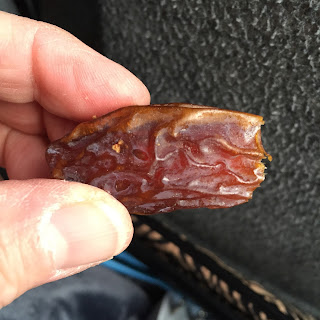 P is for Pilgrims
Many visitors to Israel/Jerusalem consider themselves to be pilgrims. Many pilgrims come to Jerusalem to see the roots of their religion come to life. These pilgrims are able to see where Jesus stayed and where the Holy Temple stood. These pilgrims walk the trail to the crucifixion.
There were several groups of pilgrims walking on one of the days we were in the Old City. They reverently carry a cross and stop along the way. 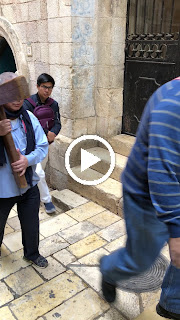 P is for Pool of Bethesda
John 5:2-9
Now there is in Jerusalem near the Sheep Gate a pool, which in Aramaic is called Bethesda and which is surrounded by five covered colonnades. Here a great number of disabled people used to lie—the blind, the lame, the paralyzed. One who was there had been an invalid for thirty-eight years. When Jesus saw him lying there and learned that he had been in this condition for a long time, he asked him, “Do you want to get well?”
“Sir,” the invalid replied, “I have no one to help me into the pool when the water is stirred. While I am trying to get in, someone else goes down ahead of me.”
Then Jesus said to him, “Get up! Pick up your mat and walk.”  At once the man was cured; he picked up his mat and walked.
I found this interesting nugget on biblicalarcheology.com – “When Jesus heals the paralytic in the Gospel of John, the Bethesda Pool is described as having five porticoes—a puzzling feature suggesting an unusual five-sided pool, which most scholars dismissed as an unhistorical literary creation. Yet when this site was excavated, it revealed a rectangular pool with two basins separated by a wall—thus a five-sided pool—and each side had a portico.”
The location of the Pools of Bethesda — actually a series of reservoirs and medicinal pools — is in the Muslim Quarter of Jerusalem’s Old City, north of the Temple Mount and about 50 meters inside St Stephen’s or Lions’ Gate. At that time, the gate was called the Sheep Gate, because this was where sheep were brought to the Temple for sacrifice.
According to an ancient tradition, Bethesda is also where Jesus’ maternal grandparents, Anne and Joachim, lived — and where his mother Mary was born. The Church of St Anne, built around 1140, stands nearby. (I’ll try to remember to tell y’all about the Church of St. Anne on another day) 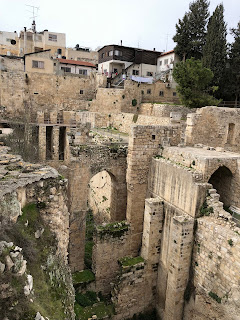 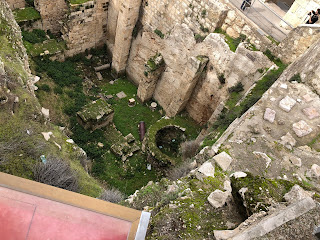 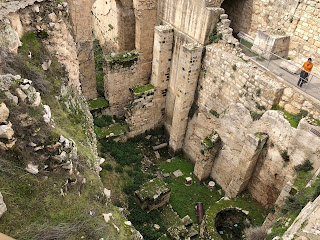 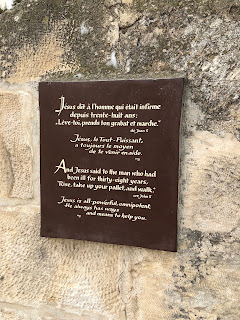