E is for Ein Gedi


On the same day that we floated in the Dead Sea, we also visited Ein Gedi. Wikipedia has this to say, “Ein Gedi, literally "spring of the kid" is an oasis and a nature reserve in Israel, located west of the Dead Sea, near Masada and the Qumran Caves. Ein Gedi was listed in 2016 as one of the most popular nature sites in the country.”


It is amazing to see an oasis in the middle of the desert. When we toured in 2016, we hiked a short way into the nature reserve and we were able to see the falls.


On this trip, we drove around just a little bit and we saw lots of Ibex.


We also ate at a local kibbutz in Ein Gedi. The restaurant was in a hotel and it was a large space with several buffet lines. 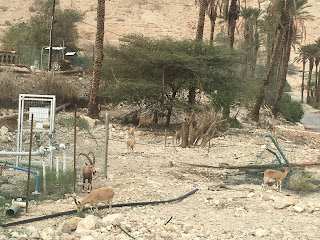 Do you remember the story about David hiding in the cave? You can read about it in 1 Samuel in the Bible. Here is one verse, "a cave was there, and Saul went in to relieve himself. David and his men were far back in the cave." This verse is 1 Samuel 24:3. These caves at Ein Gedi are where David was hiding out . . .and where Sault had to "relieve" himself (y'all - he had to go to the bathroom!!). David could have killed Saul but he didn't! Seeing these caves is mind boggling to me -- DAVID and SAUL were very possibly in that exact location.

E is also for Electricity


This is probably a boring subject but when traveling outside the US, you will probably need to do some shopping for electrical equipment. The electricity in Israel is rated at 220V. In the US, electricity is 110/120 so an adapter and a converter are both required. I purchased this converter from Amazon and it was great because I could charge my phone, etc., in addition to being able to plug in. 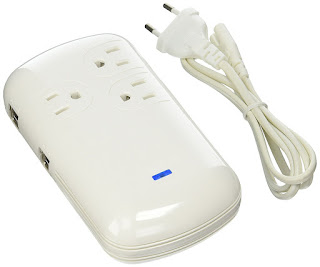 I also purchased a hair dryer from target that was dual voltage but I never used it. The first hotel on the Sea of Galilee had a weak hair dryer but it worked. The hotel where we stayed in Jerusalem is a five star hotel and they had a nicer hair dryer than my own so I used the one they provided. I did plug in my straightener even though I was warned that it might mess it up but it is still working.