April A to Z Challenge - D is for the Dead Sea

D is for Dead Sea 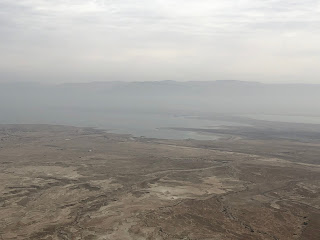 The Dead Sea – bordering Israel, the West Bank and Jordan – is a salt lake whose banks are more than 400m below sea level, the lowest point on dry land. Its famously hypersaline water makes floating easy, and its mineral-rich black mud is used for therapeutic and cosmetic treatments at area resorts. (facts from google and Wikipedia and our tour guide!)

Did you know that the water in the dead sea has been receding by over three feet each year for the past 50 years? Some experts say the Dead Sea will be gone by the year 2050 if something is not done soon.

According to PBS, King David allegedly sought relaxation at the Dead Sea in 1000 BCE. I guess that means the Dead Sea was one of the world’s first health resorts.  A few paces away, on the mountain top of Masada, Herod the Great built palaces, and in 73 CE, a thousand Jewish zealots chose death in their fortress over surrender to the Romans. Centuries later, Byzantine monks lived in monasteries overlooking its shores, and Crusaders built their castles.

Did you know that the Dead Sea is the supplier of a wide variety of products from asphalt for Egyptian mummification to fertilizers. People also use the salt and the minerals from the Dead Sea to create cosmetics. I purchased some hand cream on our trip in 2016. This year, I purchased some really cool flavored salts to use in cooking.

When I traveled to Israel in 2016, I chose not to float in the Dead Sea and I made the decision as soon as I signed up for the 2018 trip that I would float this time. I’m so glad I did because it was much fun and we laughed a lot.

We packed our bathing suits and flip flops/water shoes (which you need) into our day bags and there were changing rooms located at the beach. Just FYI for my friends in the US . . .it is an open changing room . . .everyone is changing at the same time. Maybe I should clarify - there is a dressing room for men and a dressing room for women BUT there are no curtains - no privacy. 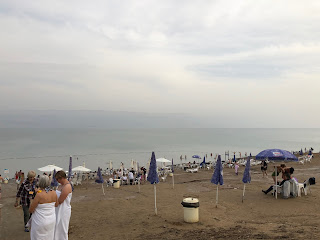 The beach is black mud and we were told to rub that mud onto any thing that hurt (knees, elbows, etc.) and to let it dry for about a minute and then to get into the water. 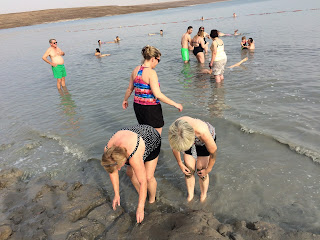 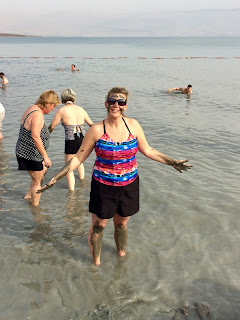 You don’t want to splash the water into your eyes. The high salt content will burn! Our tour guide told us to keep our mouths closed because two young boys had decided to see who could drink the most water and one of the boys died very quickly.  Of course, I slipped down in the mud and I was laughing so hard that I’m surprised I didn’t drink a bucket full! 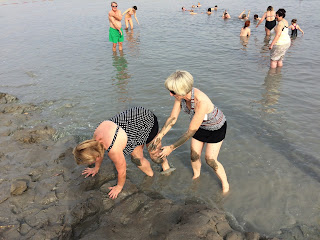 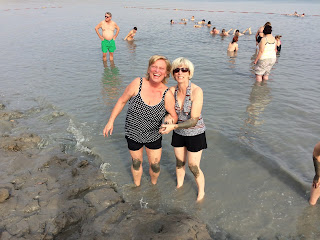 If you ever travel to this part of the world, take your swim suit and float in the Dead Sea! If you can do it with friends, it is an even better experience! 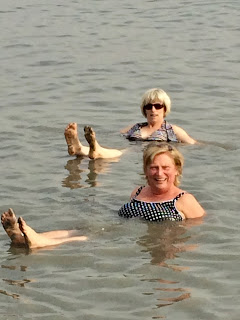 Labels: the Dead Sea; April A to Z Challenge;