This week, I was "allowed" to go on the staff retreat and I enjoyed it so much! First of all, the retreat was at Camp Sumatanga and I love spending time at Sumatanga. It was cold and rainy and cloudy but we spent most of our time inside working. We did take about a 30 minute break after we ate lunch on Tuesday. We could take a nap or go for a walk. I had my camera and decided to walk down toward the lake. I "stirred up" some geese and they were making lots of noise (they were irritated with me and I was hoping they weren't going to fly at me!!). They flew from one rock across the backwater to the other side and I was able to capture a picture of them "touching" the water. 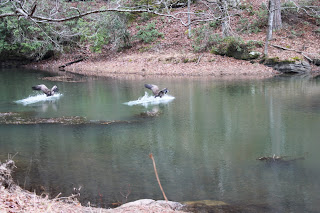 You can tell how gray and dreary it was outside but there is still beauty in a winter landscape. 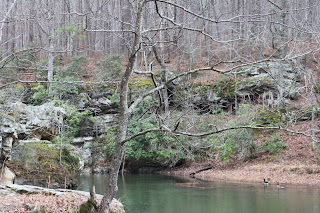 I wonder if this rock formation has a name? Anybody know? It is just so cool and tall!! It looks like three big boulders stacked on each other!! 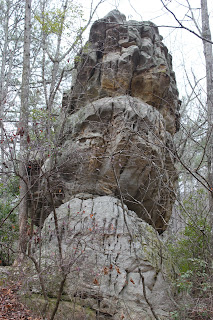 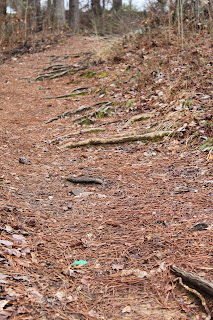 When I walked down the path, it didn't seem so steep . . .but looking at it from the bottom up, it looks pretty steep, doesn't it? 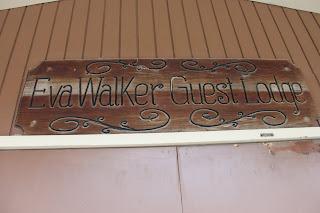 We stayed in Eva Walker which is an octagonal shaped building. The rooms are sort of like an old Motel 6 - clean and comfortable. They have made some great improvements - new fluffier towels and new shower heads. There are two double beds in each room and a bath for each room. It was nice to have a room to myself. 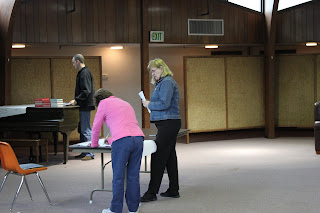 This is the room where we met. The bedrooms are all around the outside of the building (the doors open into an interior hall) and then there are these partitions that make a gathering space in the middle. We spent a lot of time compiling the results from the recent churchwide end of year survey. I like the way we do this. We divide up the results and work in pairs and create a summary and poster of our findings. Then we all come back together and go over the summaries. Then we vote with "dots" on the items that need the most work. 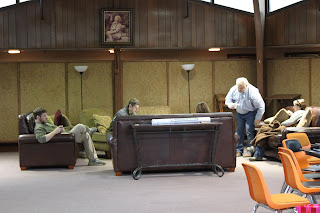 We spent a lot of time in those orange plastic chairs around tables. Someone purchased three leather sofas and a couple of comfortable chairs and donated them to the camp. They were a great place to relax between sessions. As a matter of fact, we worked until about 9:00 p.m. on Tuesday night and after we finished, many of us gathered in this area. Someone (Julie?) brought a game - Scattegories - and some folks played. I watched! Phella gave me this same game at Christmas but I have never played. I now know how to play!! They played until about 10:15 and I went to my room. I have no idea whether they stayed up later or not! I had my new book with me. . . "As the Sycamore Grows." This book is about my new friend, Ginger, who was in an abusive marriage. I stayed up and read until about 11:15.
Wednesday morning started with breakfast at 7:30. The camp has hired a new Chef and I must admit that the food has been so much better since they hired him. They served an egg and cheese and mushroom and spinach breakfast casserole and these wonderful little fried potatoes and biscuits and grits and bacon. We then worked until about 12:15 and ate lunch and packed up and came home. I thought it was a very productive retreat.
Posted by Lisa at 6:00 AM