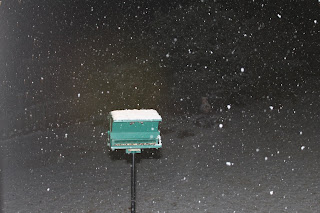 It snowed again this week . . .unbelievable. I honestly don't remember ever having a winter where we have had this much snow. It was lovely and I really enjoyed watching it through the big windows in our kitchen. It started on Wednesday night and snowed for several hours. We turned the outside flood lights on and could watch it fall. We knew that the roads would probably be ok because the temps had been fairly warm during the day . . .but when they plummeted . . .they plummeted. 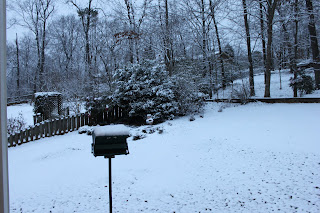 We awakened to this on Thursday morning. I took my time getting dressed and even wore jeans to work (which is actually a no-no but I decided . . .stay home . . .or wear jeans . . .so I wore jeans). I was a little worried because I'm not much of a rule breaker these days (I've broken a few over the years . . .just in my old age :-). I was worried about it but when I got to the office, at least three other folks had on jeans also!! Why is there safety in numbers? 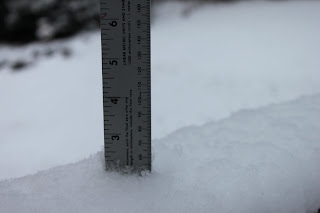 Anyway, back to the snow. We had at least two inches as you can see by my scientific measuring device above. That picture was taken on Thursday morning. This morning when we got up, there was still a little snow in the shady places . . .but now I'm sitting outside on the deck - the sky is blue, the birds are chirping and I don't have on a coat. It is about 55 degrees. Amazing how fast it is changing.
Posted by Lisa at 3:46 PM