What do you think about when you hear the word "unstoppable."  I was looking around on the internet for writing prompts and came across a page where they give one word a day.  Today's one word is UNSTOPPABLE.  Seems to fit into some of my recent posts!

When I think of unstoppable, I think of bound and determined or "stop at nothing." I just asked Mark what he thinks about when he hears the word "unstoppable" . . .his response was great - "like a train without a brake!"

Mark's thought made me think of my daddy who was an engineer for the L & N Railroad. 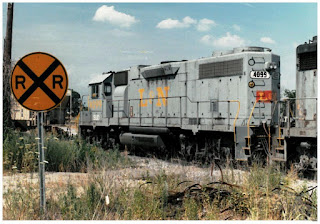 Before I started the sixth grade, my dad was driving a train and the train was involved in a terrible wreck.  A truck was across the tracks and my dad and his co-worker knew they couldn't slow the train.  They thought the truck was a gasoline tanker so they jumped . . ..they jumped from a moving train before it crashed.  This was back in the days before cell phones.  My dad was taken to a hospital and someone at the hospital called our mom.  Our mom never learned to drive.  I have no idea how she got to my dad and I don't know how long he was in the hospital (I need to ask my sisters!!).  That train was unstoppable until it crashed!  My dad had two broken legs and was in full leg casts.  Someone in our church found an OLD wheelchair that was made of wood.  He had to have the leg extensions to support the casts on both legs. 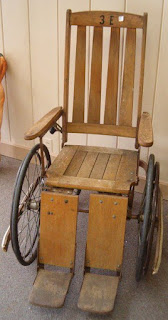 Someone delivered a hospital bed with a big pull bar and they set it up in our kitchen.  You know what is so weird?  We have a few pictures of that time and those pictures are the only memories I have of that time.  Some how our parents kept their worry from us.  I know they had worries -- especially financial worries -- but I didn't really know.  EXCEPT -- sixth grade started and I wanted to be in the band.  I wanted to play the trombone (that is so weird!!).  I couldn't be in the band because my parents didn't have the money.  Do you know that is the only time in my life where I remember my parents telling me that we didn't have enough money for something??  We were a blue collar family and looking back, we certainly were not wealthy by any means.  We ate hot dogs with cheese and hot dogs with kraut (and thought it was great!).  Somehow my parents made it work and didn't spread the worry to us.  I think the Railroad Union and our church must have helped out financially.  I wonder how in the world my dad went for check-ups at the doctor?  It seems like he was in those casts for a long time.  I don't think they did physical therapy back then.

When I saw the word "unstoppable" I was thinking that I would write about God's grace and how it is unstoppable - He is going to keep wooing us and pouring out his grace on us.

It is interesting that one comment from another person could totally change my thought process.

What do you think about when you hear the word "unstoppable"?
Posted by Lisa at 9:39 PM