Letter from the past 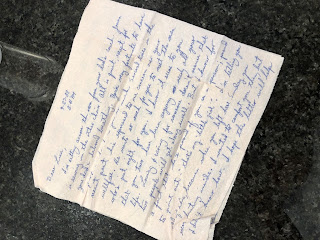 In my family, there are three "girls" and I'm the baby (which sounds hysterical considering I'm 62 but I do feel like a young girl quite often!!). My oldest sister is a widow. My middle sister was married to Tony for 30+ years. When they were married, Tony was like a brother to me. He actually walked me down the aisle when Mark and I married. But, alas, that marriage is no more . . .and that is not my story to tell. Our dad died back in 1982 and Tony had been laid off from his job in Texas and was able to come home to Alabama to help our step mother, Joann, take care of our daddy in his final weeks. Tony wrote the letter pictured above and I came across it when cleaning out a drawer and since it is written on a paper towel that will disintegrate at some point in time, I decided to type the words here.
9.27.82 (this was very close to when he died because Daddy died in September of 1982)
8:41 pm
Dear Lisa,
I'm sitting across the room from your dad's couch. Joann is sewing in the other chair. All is quiet, except for your dad's labored breathing. You're very fortunate to have a father who loves you so much. Several times in the recent past he's expressed to me concern over your welfare. He wants so much for you to meet the man who's just right for you. I know it seems to you that you two have been arguing nearly all your life. Loving and caring for someone doesn't assure that two people will get along swell. But I know for a fact that he's proud of you as a person and he is proud to point out "that's my little girl." I'm telling you all of this because when you left here Sunday you were hurting inside. I wanted to comfort you then but I didn't know how. I hope this letter will help you to understand that it isn't you that irritates him. It's just being alive right now, against his will. He's angry (more or less) at nearly everyone. He irritates so easily. He's not even the same man he was a month ago. He's just marking time - and it's passing too slowly for him.
Joann and I sure appreciate what you've done for us - the food, being here to help out. It means much to both of us. Of course, I know you're eager to do all that you can. After all, he is your dad. But your thoughtfulness means a lot, nonetheless.
I love you,
Tony
p.s. If this letter makes you cry, you can always blow your nose on it.
My dad had lung cancer and a tumor on his brain. It was hard to watch as it became harder and harder for him to breathe even on oxygen. He had worked as a carpenter and then as an engineer for the railroad and had breathed in every toxin known to man. He had been a smoker but hadn't smoked in a long time (probably 15 years).
I love that he was still referring to me as his little girl. I was 24. Until this moment, I thought I was 25 when he died but I guess I was just 24. Now that I have "children" in their 30's I understand how they will always be my babies - my "little children."
I have no idea what daddy and I had argued about. Tony was right - Daddy and I were always arguing but I ALWAYS knew without a shadow of doubt that he loved me. This picture was taken after his diagnosis. He refused chemo but did have radiation.
I want to end on a happy note -- I didn't remember that part in the letter about my daddy wanting me to meet someone. I had just started dating Mark a month or so before daddy died. Mark never met him. I think my daddy would be happy with my choice!
Posted by Lisa at 1:14 PM