In July, Mark and I decided that we would like to take a trip this year. We have traveled with EO tours several times so Mark looked on their website and found a trip to Ireland that was departing on October 5. I reached out to our contact at EO and asked if any groups had a couple of vacancies and if so, could Mark and I jump on. She told me that there were two groups combining from Ohio and Indiana and they could accomodate us. We literally signed up for the trip and paid our money on the last day. . . and made plans to travel with total strangers!!

We flew from Birmingham to Philadelphia on Tuesday, October 5

and met up with the remainder of the group. I had talked on the phone and via email with a couple of folks leading the trip and we were able to meet in person in the airport. We all boarded our overnight flight to Dublin and arrived bright and early on Wednesday, October 6. Our tour guide, Des, was waiting for us after we retreived our luggage (and changed some dollars into Euros) and we headed to the bus where we met Derrick, our driver. As we were walking to the bus, I saw a soft drink machine and ran over to get one. I met a nice Irishman who literally gave me a diet coke and welcomed me to Ireland!! That encounter was indicative of the way we were treated for the entire trip. The people were lovely!!

Our first stop was quite interesting. We stopped to go to the restroom at a "truckstop" and a few folks grabbed a cup of coffee, etc. We reboarded the bus and drove some more and I'm sure that Des shared things with us but I kept falling asleep! At lunchtime, we made another stop . . .at another "truckstop." These gas station/restaurant/stores were quite interesting. Evidently McDonald's sued this group (Super Mac's) because the name sounded too similar but the group won! We ate lunch and boarded the bus again.

Our first stop was in Galway. We toured our first church and it was lovely. 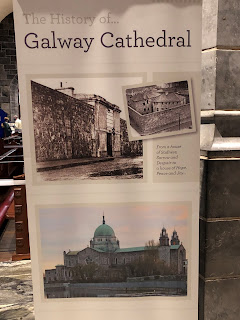 After the church, we boarded a riverboat and went on a riverboat cruise and had tea (and scones!). 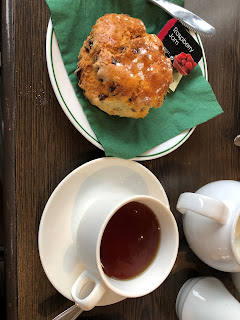 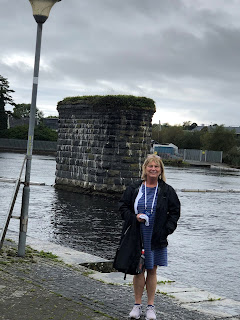 We also received a lesson in making Irish Coffee and a demonstration of Irish dance. After our boatride, we headed to the hotel for dinner and bedtime. Actually, Mark and I took a 30 minute snooze before dinner. Jet lag is real. Mark was excited because he had an appetizer with salmon (salmon and broccoli tartlet) and cod for his main dish. I had my first bowl of Irish vegetable soup and ordered it multiple times over the next 8 days. Why did I not know about Irish brown bread spread with Irish butter? It is probably a good thing that I just met it and it stayed in Ireland while I came home to the US.

At the end of the day, we were so excited to be in Ireland and were looking forward to what tomorrow would bring!