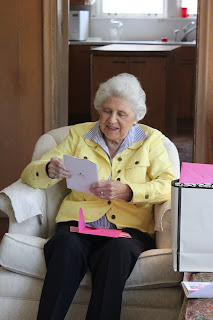 We celebrated Mother's Day weekend starting on Thursday at 2:30 p.m.  I picked Mark up at his office and we drove to Nashville (blog to follow about all of that soon!).  One of the reasons for our drive north was to pick up Mark's momma.  She had been visiting with Susie, my dear sister-in-law, who lives in Delaware.  We drove back to Birmingham on Friday afternoon. 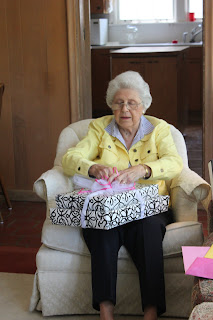 On Mother's Day morning, no one was home but Mark and me.  He gave me a card with a crisp $50 bill inside earmarked for a pedicure which was desperately needed!!  Mark went to early church and sat with him mom in the balcony and then he and I met for Sunday School and then I went to the contemporary service and sat with our kids.  We then all met at Grandmother's house to order lunch from Zoe's.  While we were waiting, Grandmother opened her gifts.  We got her a beautiful outfit from Talbots (thanks to Aunt Susie for shopping this time!!!!).  We (Aunt Susie, Aunt Alice and I) usually go together to get an outfit for our mother/mother-in-law for most occasions.  Sometimes I shop (I am the one who purchased the kitchen aid mixer for last year's occasion - or I should say "one" of the occasions).  Sometimes Alice shops -actually she and I bought the Christmas gift this year with grandmother in tow!!  Susie shopped for Mother's Day.  Now it is time for birthday again in July . . .oops - looks like it might be my turn again.

Here we are . . .sweet daughter-in-love, Lauren, Glenn, me and Laura.  They gave me all sorts of great surprises.  All three of them went together and gave me this really cool camera backpack made by Thirty-One and a matching lunchbox and a camera strap and lens case.  Laura gave me a great Auburn t-shirt with a monogrammed chevron pocket and Glenn and Lauren gave me a RED  - - yes, indeed I said R.E.D. -- whisk and spatula . . .(of course, it matches my red big mixer and red small mixer).  I felt so loved. 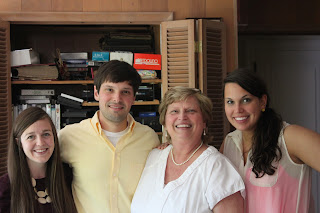 We had just placed our Zoe's order when Uncle Bill arrived.  I wanted to call and add his order to the order we had already phoned in but Mark said, "no, we will just go in and add it."  I just want you to know that was a HUGE mistake.  It took Mark and Glenn about an hour to get our food and we were starving!!  It was delicious when we finally ate.  When you are hungry food tastes so much better!!
Being a mother is and has been such a blessing.  It is far harder than I ever anticipated.  When they were little I was physically tired.  Some years I have been emotionally and spiritually tired.  I have prayed more than I ever thought possible (and I need to pray even more!!).  I never knew you could love anyone so fiercely. . . or want to protect anyone so much.  Being a mother has taught me more patience than I EVER thought I would have (I had none - zip - nada . . .I prayed for it and the very next month found out I was pregnant with twins.  Don't tell me that God doesn't have a sense of humor!!).  Being a mother has taught me to put others first - to not be so selfish - even when I really want to be.  Being a mother has shown me how God loves us unconditionally and how God extends grace to us . . .because I am reminded of that often - especially when I fail to extend unconditional love or grace.  Being a mother has shown me that I AM NOT IN CONTROL.  Dadgum it.  When they were little, I was somewhat in control.  They were sweet and kind and had good manners and all of those things but even then, I knew that these "children" were a gift from God.  They were His first.  He loved them even before I knew them. . . so I wasn't really in control.  I just thought I was in control :-)  Being a middle-aged mother has taught me that I need to put Mark (hubby) before my children - big switch there - probably should have done that years ago.  Being a middle-aged mother has shown me where I made mistakes, where I could have done a better job . . .but being middle-aged has also shown me what good and fine people Glenn and Laura (and now Lauren) are.  They have good hearts.  They love Jesus.  They love people.  They work hard.  They aren't perfect.  Heck - neither am I.  Are you?  None of us are.  Being a middle-aged mother has shown me that also!!  It has shown me that it is ok to be OK with who I am and who you are.  It has also shown me that I am never too old for God to shape and mold me into the woman he wants me to be . . .and to be ok with that, too!!  Being a middle-aged mother has made me think of my mother who died at age 50.  I wish I had known her more.  Being a middle-aged mother makes me smile - yes, it does.  It makes me realize that I have been blessed - very blessed!!  I've been blessed by my own mother and grandmothers who have all been gone so very long.  I've been blessed by my sweet mother-in-law and my two older sisters and also by ladies in the church where I grew up - Inez Lane and Mrs. Parker and so many others who took me in as their own.  I've been blessed now by having both older and younger friends . . . I'm in the middle . . .so middle-aged is not so bad.
Guess what?  I'm smiling.  I'm a middle-aged momma . . .and I've been thinking about that today and it is alright by me.  Yes, it is!!
﻿
Posted by Lisa at 1:47 PM