Several years ago, my mother-in-law's brother (no longer living) gave a birthday card to her.  The card was one of those that sings when you open it.  She opened the card and heard these words, "you were born long ago . . . .long ago, long ago, long ago!"  We laughed and laughed about that card.  The male voice singing the song sounded like someone from an old timey Italian restaurant.  Discussion about that birthday card (and Uncle John) comes up at just about every birthday party for my mother-in-law.  Yes, yes, it did again this year!

We celebrated her birthday at our house after church a week or so ago.  She still cooks Sunday lunch for the entire family every single week so I try to offer to host every once in a while to give her a break . . .especially on her birthday and Mother's Day.

I ordered 4.5 pounds of fresh shrimp from our local Snapper Grabbers and had them peeled and deveined and then made spicy baked shrimp with them.  I made cheese grits (and some plain grits for Scott, who doesn't like cheese).  We had slaw alongside and I roasted some broccoli (she thinks most meals need more than just a salad/slaw so I wanted to live up to those expectations!!).

We've been trying to get as many pictures of Susie (mother-in-law who I have NEVER called Susie to her face) as possible with the different grandchildren and great grandchild.  She was wearing the dress that we gave her for Mother's Day - WIN!! 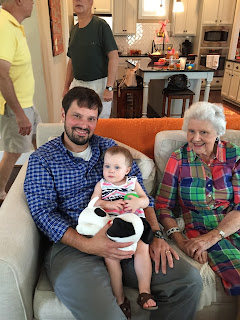 Susie is the cake-baker extraordinaire so it is really difficult to come up with a special dessert for her.  She loves caramel pecan cake so I bought a caramel cake that is made by a lady in Alabama - 7 layers with caramel icing in between each layer!  I bought chocolate covered pecans and decorated the cake with the pecans.  My sister-in-law, Rebecca, brought the ice cream - one was butter pecan, Susie's favorite!! 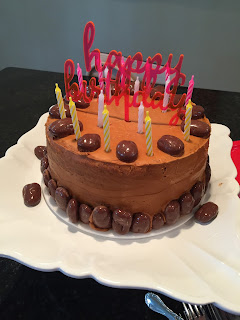 I had sprinkled some chocolate covered pecans around the cake on the cake stand . . .and Mark kept eating them.  They were becoming sparse! 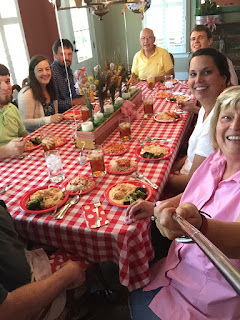 I tried to take a picture of everyone with the selfie stick.  Susie is so tiny that she is hidden between Laura and Ben. (wrong nephew - Laura just texted me . . .sorry to Thomas!!  I know who was here that day - really, I do!) 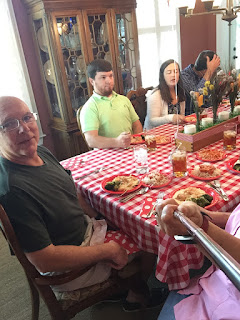 I tried to get a shot of the other side of the table, too.  I haven't mastered the silly pink selfie stick yet but we are working on it! (just FYI - that is not Mark . . .it is his twin brother . . .really) 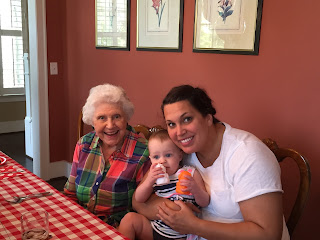 I was able to snap a picture of Laura, Emma, and Susie (grandmother).  I love these three! 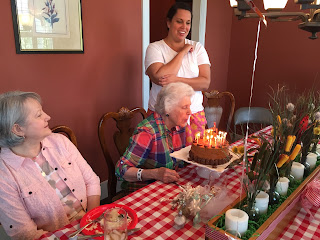 Bill and Rebecca hadn't arrived when I took the first picture so it is good that Rebecca is in this picture!!  She was the provider of all good ice cream!

Alice, Grace, and George had celebrated earlier in the week (on the actual day) and Alice and Grace were at the beach so we weren't quite complete for the sunday crew.

Do you celebrate birthdays at your house and with your family?  I can't tell you how old she is but just let me tell you once again . . .she looks WAY younger than she is!!  She was born long ago . . .long ago, long ago, long ago!