I thought that I was going to catch up - get all of my July posts written before the new month of August (how could that possibly be????? august already?????). Here I am just now writing about the fourth of July - still running about a month behind.  If this is a fourth of July post, then why does it begin with a picture of a dog with a man's finger in the dog's mouth???  That is Sport and he is a cutie pie.  Sport is Mollie and Roger's new dog . . .and we spent (and have spent it with them for many years) the fourth of July with Mollie and Roger and various other family members.  Sport greeted us as we all arrived and he is such a sweet dog.  He and Uncle Bill struck up an immediate friendship. 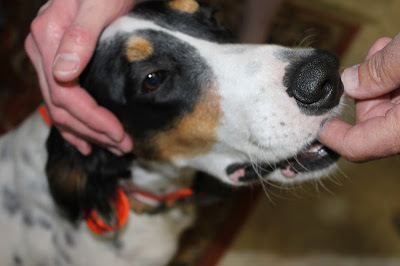 Uncle Bill was talking so sweetly to Sport and Sport was loving the attention.
Uncle Bill is actually Mark's brother but since my kids call him Uncle Bill that is what I call him most of the time!!  Bill rode down with us because his wife was working at Children's Hospital.  Bill has Parkinson's and it is better for him not to drive long distances.  Bill is an engineer by education and he knows a little bit about almost everything.  Bill operates in much slower motion than Mark or I but when Bill does something, it is done perfectly.  He is a pretty interesting conversationalist in the car. 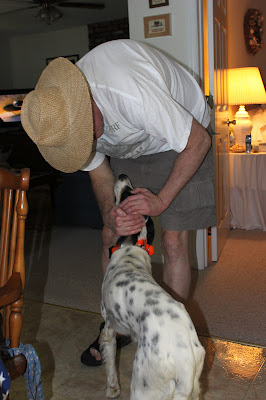 We have those in the family who do not swim and sunbathe anymore.  We are blessed (and I know that.  yes, I know that --  even when I complain) to have some of our older generation still healthy and able to celebrate with us.  Mark's momma (yes - that is what I call her or either I call her Grandmother) and Aunt Mary have been sister-in-laws for many years and I think they have been friends even longer.  They are dressed in their red, white, and blue. 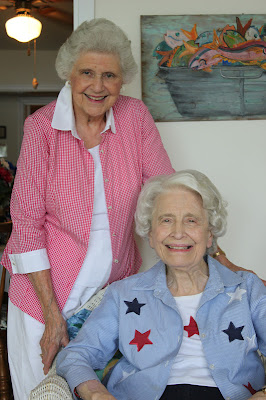 We also have some of the younger generation and they are the ones who make the day so much fun.  These girls are so sweet and smart and funny!!  Our children have all grown up together and it has been so interesting to watch them grow and become adults.  We are so excited that Lydia has been coming to our house on Tuesday nights for the young adult group.  She is a great addition to the group. 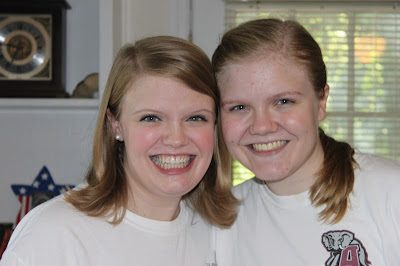 Here is a picture of all three girls with their momma.  Nancy is Mark's first cousin and she is the reason that Mark and I are together.  I met Nancy way back when I first started attending Trinity and she planned a canoe trip for singles and invited her cousins . . .Mark and George . ..to go.  I also went on that canoe trip and I knew on the day that I met Mark that we would get married someday.  I wasn't even in the canoe with him.  I was in the canoe with some other guy whose name was Peter!!  But that has nothing to do with fourth of July and neither does this . . .Let me tell you about Nancy.  Nancy is a strong woman.  She has battled breast cancer and she is doing well and we love her so much!!! 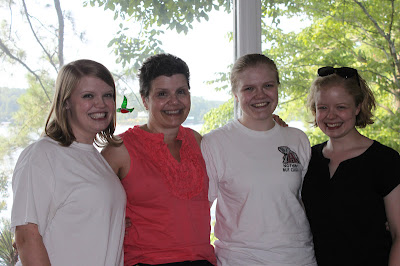 This glassed in porch (sunroom?) is a wonderful place for those who aren't playing in the water.  The porch looks out over the water and those sitting there can chat away in the airconditioning and watch those of us who are outside. 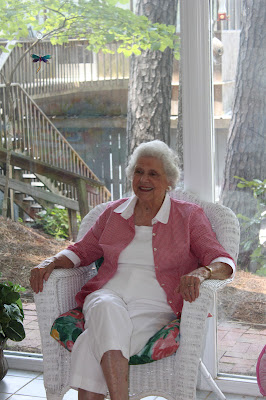 Mark and Mollie were working on the ice cream, I guess.  I really have no idea what they were doing but that looks like a box of rock salt in her hand.  She always makes really good homemade icecream.  I never ate any this year.  I think she had vanilla and fresh peach and I am sure that they were both delicious. 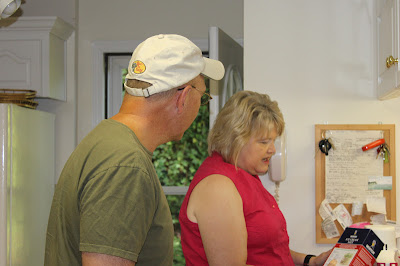 We had a great day visiting with family and relaxing in the sunshine.  We ate some great BBQ and side dishes and we spent time chatting and laughing.  Mollie works herself to death getting ready for all of us.  She always goes down the week before and has to clean, etc.  She picks up the BBQ and other snack items and drinks and makes the ice cream and we all bring a side to share.  We had baked beans and slaw and fresh fruit and all sorts of dips and chips and potato salad and  tons of desserts.  She and Roger are so gracious to share their lake home with us.  There have only been a few years where neither of our children was with us.  This was one of those years.  Mark is blessed to be a member of a large family.  There are four "kids" (now grown ups) in Mark's immediate family and there were four "kids" (now grown ups) in Mollie and Nancy's family (they are sisters).  Those first cousins grew up down the street from each other and went to the same church and have remained close even though some live out of town now.

I've typed way too much on this one post so I guess I'll end for now.  Funny though - as I've been sitting here I've been thinking of stories about Mark and all of his cousins that have been told to me over the last 28 years.  Maybe I need to write down a few of those stories - some are pretty funny!!!!
Posted by Lisa at 7:41 PM