In the southeast part of the US, football is big - real big - as in King.  In the state of Alabama, the great rivalry is between Auburn University and the University of Alabama.  When people move to Alabama, they have to choose one.  Really.  I'm not kidding.  Conversations are peppered with football references like 17-16.  The Iron Bowl is the game of the year between Auburn and Alabama.  The game is played Thanksgiving weekend.  The team that wins has bragging rights.  On the Sunday following the game, our sanctuaries are filled with blue and orange ties . . .or red and white ties/pants/etc.

Three of our nephews grew up in Delaware.  They were playing Lacrosse long before people in the south were playing.  Our nephew, Thomas, plays for the club team at the University of Alabama.  We are Auburn fans.  Understand?

I picked up grandmother after work and then we headed to the chick-fil-a drive-through and then we took the food to Glenn and Lauren's house.  We ate dinner and then drove to Thomas's game (which happened to be at the Hoover stadium!!).  We knew that Alabama was playing Auburn but I had to laugh out loud when the announcer said that this was the Lacrosse Iron Bowl - I must admit that had never entered my mind. 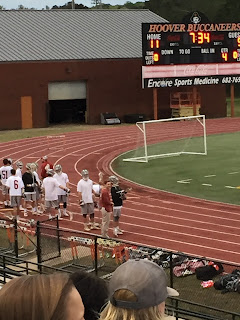 This was Emma's first sporting event.  It was very cool that night (even I had on a jacket) and Emma was all bundled up in her finery!! 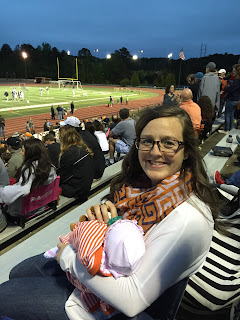 This was my first Lacrosse game - boy, I was amazed at the athleticism.  Those boys were in continuous motion - running up and down the field.  They really hit each other hard with those sticks!! 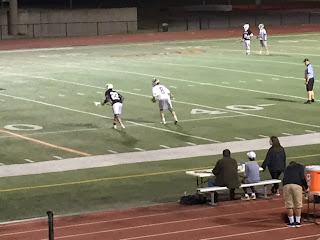 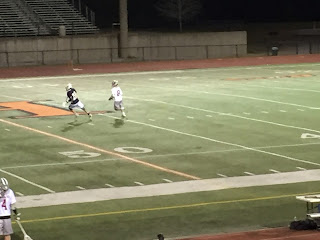 It started raining at some point during the game and since we had Grandmother with us and also baby Emma, we decided it was time to leave.  Auburn was ahead when we left but Alabama ended the game with a one point lead.