Isn't that an interesting title?  Don't you want to read more? hahahaha!!  On Saturday night, Mark and I met three of our friends at Your Pie in Homewood.  In this picture, there is a blue sky.  There was not a speck of blue sky on Saturday afternoon/evening.  It was raining so hard that we had to delay leaving home!!  There was only one other customer in the establishment when we arrived.  You go through a line much like a Subway picking and choosing crust, toppings, etc.  Each pizza is a small size hence "your pie" (I guess!).  Bless the employees' hearts . . . they lost money on us.  They burned the first three pizzas and had to remake those and then they delivered our pizza to the wrong table and then retrieved it and offered it to us . . .no thank you!  So that means they had to remake all four pizzas!!  Even with that fiasco, this was a good place - especially for Mark!  Mark is not a red sauce eater nor a white sauce eater.  Mark can take or leave pizza.  I ordered and we shared.  We had whole wheat crust brushed with olive oil and topped with feta, mozzarella, spinach leaves, banana peppers, chunks of chicken breast, and black olives.  When I described this "pizza" to two other people and said that Mark loved it . . .they immediately responded "because it was not pizza - it was a flatbread sandwich."  I guess that is true. Mark thinks it was pizza and I liked it fine so we were/are golden!! 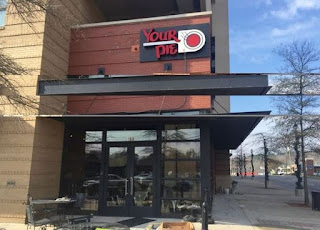 After dinner, we had tickets to a local theater - Homewood Theater.  A friend of ours opened this venue and their first show was in August 2016.  You can read all about this small venue here.  If the weather had been nice (like the picture above) we could have walked from the eatery to the theater but since it was still raining like crazy, we moved our cars from one parking deck to another parking lot.

Mark loves a lot of things but two things he doesn't like are pizza . . . and theater productions.  He was a good sport and went along.  I didn't hear him laughing but I was laughing loudly enough for both of us!!  It HELPED A WHOLE LOT that Red Hills Brewing Company was on site with a beer tasting and believe me . . .Mark tasted them all.  He did pour one down the bathroom sink because he didn't like it . . .but he enjoyed the rest!!

The name of the group performing was Ugly Baby Improv Troupe. 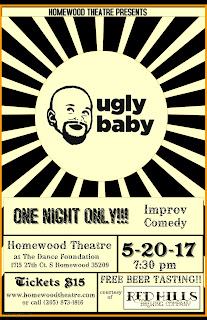 I love real pizza and I love live theater and I love improv!!  I love how quickly the actors/performers? can think of a response.  They asked for a prompt from the audience and someone said VCR.  These guys were young but all of them were able to make lots of "funnies" about the time frame/size/movies etc. associated with VCR's.  In the second act (more beer and pretzels and cheese puff balls during intermission . . .I had water :-) ), the actors/performers asked three different people in the audience to read various text messages from their phones - like "scroll back to four text messages ago and read the exchange to us" . . . and then they ran with all three of those different text messages.  They have to have such quick minds to come up with the banter - goodness gracious!

So yeah - Pizza Pie and Ugly Baby on a Saturday night!! I loved being with friends and I loved laughing!