To love and to cherish

Once upon a time, there was a girl named Dana.  She grew up going to church in another part of the state and while she was living in Birmingham, she became involved in a Tuesday night group (yes, the one at our house!!).  She and her sister, Cara, faithfully attended the group almost every week and the host family considered both girls to be "just like their own."

There was also a boy named Matt.  Dana was asked to contact Matt and tell him about the Tuesday night group.  They had met years before at Auburn but I didn't know that story until several weeks later.  Matt and Dana's friendship was renewed and the friendship turned into love.  Mark was sitting at the table on the porch with Matt and Dana one Tuesday night.  Matt turned to Dana and said, "hey - would you like to hang out together sometime?  like other than here?"  Dana's reply was "yes."  The rest is history!

Matt and Dana were married last month and they asked me to read the scripture during the wedding.  I was so very honored to be included.

The rehearsal was on Friday night and the rehearsal dinner was at a local country club and we were able to sit with Mollie and Brian (Brian officiated at the wedding) at the dinner.  Mark talked Brian's ear off (is anyone surprised?).  Mollie and I worked on solving the problems of the world and laughed a lot in between.  One of the waitstaff approached Mark and said, "George, your table is over there."  I said, "this is not George."  More conversation ensued and the wonderful waitstaff employee had his picture taken with Mark!  George is in a rotary club that meets at that country club every week.  It is funny to me that they are still so identical!!

The wedding was lovely - I didn't faint or fall down and I was able to somewhat hide behind the lectern.  Brian did an awesome job (as usual) on the homily.  Matt and Dana said their vows and promised to love each other forever . . . and then Matt and Dana were pronounced husband and wife. 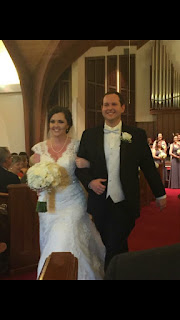 The reception was at a venue downtown.  The food was yummy and they had moscato, which I love (Mollie told me that it tastes like a popsicle melted in the glass!  Guess that is why I like it!) A side benefit was the fact that we got to hang out at the reception with Glenn, Lauren, Laura, Katie and Brooke.  Some of that group are our biological kids and some are those we claim just like we claim Dana and Cara. 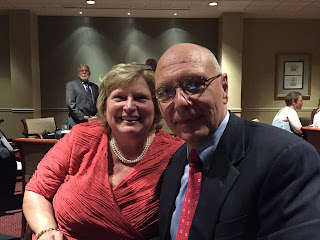 Three beautiful girls - Brooke, Laura, and Katie --all dressed up! 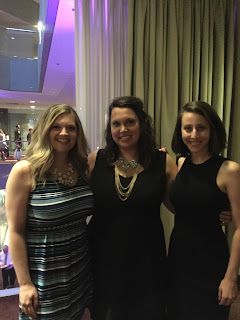 Father/Daughter dance - we were upstairs looking through a window at the dance floor. 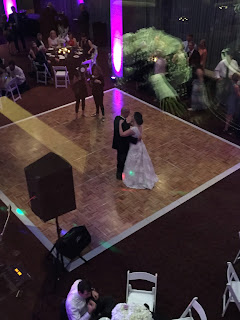 Sweet baby girl stayed with her other grandmother and Glenn and Lauren had a "date night" to the wedding. 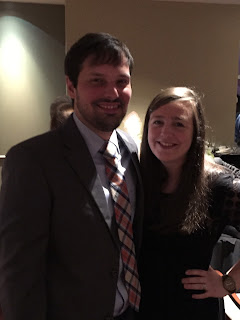 We love getting to know all these young adults - they are such a blessing in our lives!!