April A to Z Challenge: O is for Old City and Mount of Olives

O is for Old City
The Old City of Jerusalem is one of my favorite places. I think I've said that about multiple places in Israel. I guess I should apologize again -- this post is a photo overload.
The Old City is a 0.9 square kilometers walled area within the modern city of Jerusalem. Until 1860, when the Jewish neighborhood Mishkenot Sha'ananim was established, this area constituted the entire city of Jerusalem. (Wikipedia)
Just in case you are like me and are metrically challenged – that is like 0.35 square miles. It is really a small space but there is so much crammed into that small space that it feels huge at times!

You could enter the Old City about a block from our hotel so it was easy to walk over at night.

There are four quarters in the Old City. There is the Jewish Quarter, the Muslim Quarter, the Armenian Quarter, and the Christian Quarter. There are shops and restaurants side by side with merchandise spilling over outside the doors. Some of the shops have lodging overhead where families have lived for generations. One family said that they have been in residence for over 300 years. In the Muslim quarter, you could buy everything from underwear to fresh fruits and vegetables to fresh goat to toys! 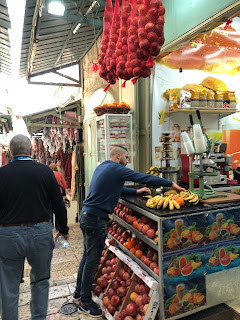 There are multiple gates into the city, also. This is from Jewish Virtual Library, a source I’ve used before:

Jaffa Gate
The main entrance to the Old City is the Jaffa Gate, which was built by Suleiman in 1538. The name in Arabic, Bab el-Halil or Hebron Gate, means "The Beloved" and refers to Abraham, the beloved of God who is buried in Hebron.
The gate on the western side of the Old City marked the end of the highway leading from the Jaffa coast and now leads into the Muslim and Armenian quarters. A road allows cars to enter the Old City through a wide gap in the wall between Jaffa Gate and the Citadel.
This passage was originally built in 1898 when Kaiser Wilhelm II of Germany visited Jerusalem. The ruling Ottoman Turks opened it so the German Emperor would not have to dismount his carriage to enter the city.

Herod's (Flowers) Gate
The entrance into the Muslim quarter through the northern wall.
Damascus (Nablus) Gate
Located on the northern wall, it is the busiest and most magnificent of all Jerusalem’s gates.
The gate consists of one large center gate originally intended for use by persons of high station, and two smaller side entrances for commoners.
New Gate
So named because it was constructed relatively recently - in 1889.
The New Gate was built with permission of Sultan Abdul Hamid II and is located near the northwestern corner of the city. It leads into the Christian quarter.
Zion Gate
Located in the south, this was one of the main gates used by the Israel Defense Forces in 1967 to enter and capture the Old City.
The stones surrounding the gate are still pockmarked by weapons fire. This entrance leads to the Jewish and Armenian quarters. 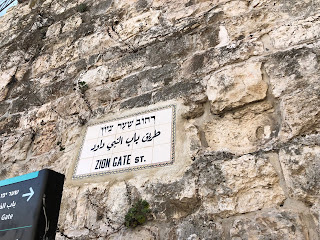 Dung Gate
Located along the south wall, this gate is closest in proximity to the Temple Mount.
The gate received its name because starting in the 2nd Century, refuse was hauled out of the city through this gate.
Lions' Gate
Located in the east wall, the entrance leads to the Via Dolorosa. Near the gate’s crest are four figures of lions, two on the left and two on the right. Legend has it that Sultan Suleiman placed the figures there because he believed that if he did not construct a wall around Jerusalem he would be killed by lions
Israeli paratroops from the 55th Paratroop Brigade famously stormed through this gate during the Six-Day War to conquer the Temple Mount, after which they unfurled the Israeli flag above the Old City. 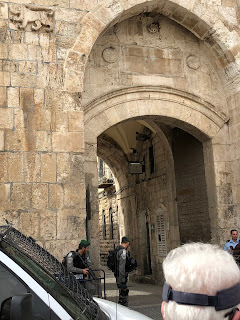 See the Lion above and the Lions below 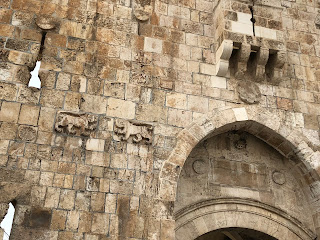 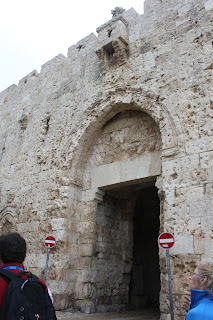 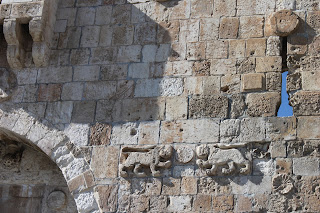 Golden (Mercy) Gate
Facing the Mount of Olives on the eastern side of the Old City, this gate was constructed in the post-Byzantine period.
According to Jewish tradition, the Messiah will enter Jerusalem through this gate. To prevent this, the Muslims sealed the gate during the rule of Suleiman.
Triple Gate
Dating back to the pre-Ottoman era, the three arches of this gate are located in the south wall and are sealed shut

Double Gate
This entrance to the south wall is sealed shut and also dates back to the pre-Ottoman times. I think this is the gate that is sealed shut right over the cemetery area.
Single Gate
Constructed prior to the Ottoman period along the southern wall, the now sealed gate led to the underground area of the Temple Mount known as Solomon's Stables.

O is for Mount of Olives
The Mount of Olives, one of three hills on a long ridge to the east of Jerusalem, is the location of many biblical events. Rising to more than 800 metres, it offers an unrivalled vista of the Old City and its environs.

The hill, also called Mount Olivet, takes its name from the fact that it was once covered with olive trees 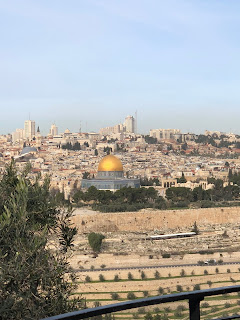 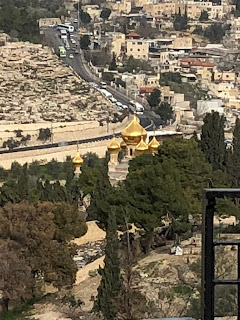 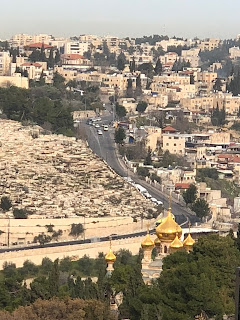 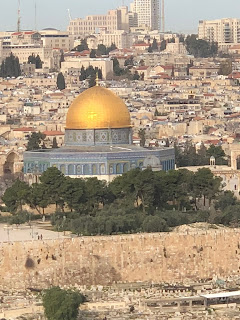 In the New Testament, Jesus often travelled over the Mount of Olives. He also went there to pray or to rest.
He went down the mount on his triumphal entry to Jerusalem on Palm Sunday, on the way weeping over the city’s future destruction (Luke 19:29-44).