April A to Z Challenge: K is for Kibbutz and Kosher

K is for Kibbutz
A kibbutz is a communal settlement in Israel in which all wealth is held in common and profits are reinvested in the settlement. The first kibbutz was founded in 1909. After reading lots of articles, I think there are about 270 around today, with a total population exceeding 120,000. Adults live in private quarters, while children are generally housed and cared for as a group (this may or may not be true today). Meals are prepared and eaten communally. Members have regular meetings to discuss business and to take votes on matters requiring decisions. Jobs may be assigned by rotation, by choice, or by skill (the facts above come from Merriam Webster – the opinions are mine!)
Like I said, I have been reading lots of articles on Kibbutzim (plural!) and have learned so much! Since the A to Z challenge last year, I had forgotten how much reading I would need to do about some of my subject matter.
The following is from Jewish Virtual Library:
Members are assigned to positions for varying lengths of time, while routine functions such as kitchen and dining hall duty are performed on a rotation basis. Unlike former times when they lived in communal children's houses, children in the majority of kibbutzim today sleep at their parents' home until they reach high school age (see my note in the first paragraph). However, most of their waking hours are still spent with their peers in facilities adapted specifically for each age group.
Children grow up knowing the value and importance of work and that everyone must do their share. From kindergarten, the educational system emphasizes cooperation in daily life and, from the early school grades, youngsters are assigned duties and take decisions with regard to their peer group.(this is probably a smart thing to teach!!) Young children perform regular age-appropriate tasks, older children assume certain jobs in the kibbutz and, at high school level, they devote one full day each week to work in a branch of the kibbutz economy.
Elementary schools are usually on the kibbutz premises, while older children attend a regional kibbutz high school serving several area kibbutzim, in order to experience a broader range of academic subjects and social contacts. At all age levels, accommodations are available for youngsters with special talents or needs.
Some 40 percent of all kibbutz children return to settle on their kibbutz after army service (did you know that all Israeli citizens have to serve in the military immediately following high school? The girls serve 2 years and the boys serve 3 years. Our tour guide shared about his children.  I think it is pretty cool that 40% of the kids go back to their kibbutz.

Originally, agriculture was the mainstay of all Kibbutzim but now there are other kinds of industries.  Kibbutz Degania’s diamond cutting factory now grosses several million dollars a year, whilst Kibbutz Hatzerim’s company Netafim was the global pioneer in drip irrigation equipment with a factory in the kibbutz and many more around the world. There are hotels and hostels and museums located on some of the Kibbutzim. The Yigal Alon Museum, located at Kibbutz Ginosar, houses the famous Ancient Boat (“Jesus Boat”), a 2,000 year old small fishing vessel that was uncovered from the mud at the bottom of the Kineret during a particularly bad draught 30 years ago. 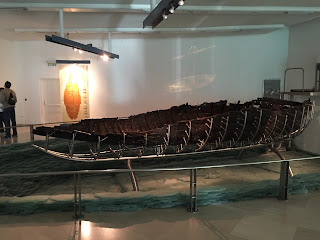 Pictures of the Jesus boat - I'm going to be honest . . .
it is so much smaller than I imagined.
I know it is just the shell but I keep thinking about
the 12 disciples and Jesus in a boat this
size. 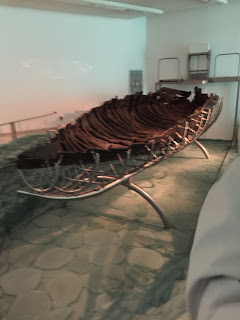 Our tour guide, Rafi, told us that Kibbutz are based on socialism, Zionism, with a little communism thrown in. He and his wife have both experienced life on a Kibbutz.
When I hear about living on (in?) a kibbutz, I can’t help but think of the way the first followers of The Way lived in Acts 2:42-47. “All the believers devoted themselves to the apostles’ teaching, and to fellowship, and to sharing in meals (including the Lord’s Supper), and to prayer. A deep sense of awe came over them all, and the apostles performed many miraculous signs and wonders. And all the believers met together in one place and shared everything they had.  They sold their property and possessions and shared the money with those in need.  They worshiped together at the Temple each day, met in homes for the Lord’s Supper, and shared their meals with great joy and generosity— all the while praising God and enjoying the goodwill of all the people. And each day the Lord added to their fellowship those who were being saved.
One last fun fact – the people who live in a Kibbutz are called Kibbutzniks!

K is for Kosher Food
In Jerusalem, our hotel served only Kosher food. Let me stop and say the food is wonderful, colorful, and delicious.
What does Kosher mean? Kosher food is prepared using Jewish dietary law rules – think Old Testament. Our tour guide, Rafi, shared a good bit with us about kosher food. We were also told to order the kosher meal when flying and you will get better food!

This is from www.thespruce.com:
To qualify as kosher,
·       mammals must have split hooves, and chew their cud.
·       Fish must have fins and removable scales to be considered kosher.
·       Only certain birds are kosher. Generally speaking, they are birds that are non-predatory.
·       This means pork, rabbit, eagle, owl, catfish, sturgeon, shellfish, and reptiles, among others, are non-kosher.
·       Nearly all insects are non-kosher as well though, per the Talmud, there are a small number of kosher locust species.
·       Kosher species of meat and fowl must be ritually slaughtered in a prescribed manner to be kosher.
·       Meat and dairy products can not be cooked or consumed together.
·       A kosher food that is processed or cooked together with a non-kosher food, or any derivative of a non-kosher food, becomes non-kosher. For example, food coloring derived from shellfish and used in a cake makes the cake non-kosher.
Let me say that I love shrimp and I have no idea whether they have shrimp growing in their waters but they definitely do not serve shrimp. Let me also say that when we landed in Chicago, a large number of us ate cheeseburgers!! A few folks even added BACON! I'm sitting here chuckling as I remember how excited we were to eat those yummy burgers and bacon! 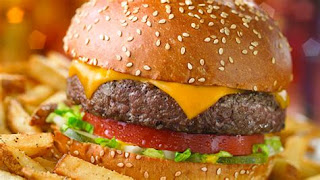