So . . .2016 was an odd year in many ways.  There were a lot of good things - a trip to Israel (amazing!), a grandbaby (even more amazing) but there were lots of strange things in 2017 --  too many deaths - both in our church and in the world, very divided political opinions, the list could go on and on.

For many years, we hosted a Gumbo and Goodies party on the Friday before Christmas.  We moved it to New Year's Eve a few years back . . .and then we didn't have it last year . . .and decided not to start the tradition back this year.  We didn't want to sit home alone and we wanted to usher out the old year and welcome in the new year with family/friends so we hosted a tiny group of friends/family - just enough to fit around the table.

I love decorating for a party and as soon as the Christmas decorations came down . . . the New Year's decorations went up. 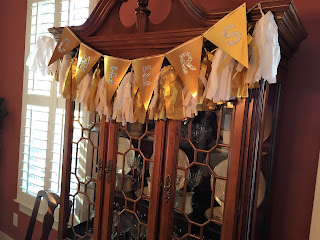 I made the cheers banner.  I was in Hobby Lobby on Thursday and they had marked the Christmas merchandise down 80%.  I found three of the gold and white tassle banners (I made that name up - I have no idea what they are really called!!).  Y'all - those banners were originally $24.99 and I would never have paid that because I would have convinced myself that I could make them cheaper!  They were marked down to $5 - score!! 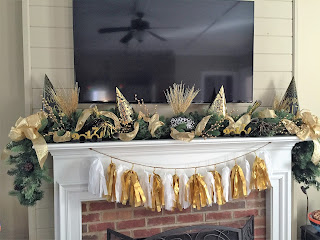 I was able to reuse the garland on the mantle - quick switch out of Christmasy things to New Year's Eve hats, 2017 glasses, etc. 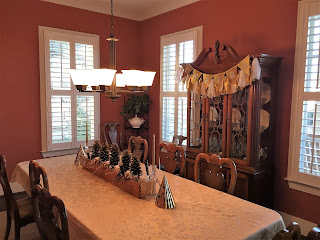 I've written before about my box that Brian made.  I did a quick change out to gold pine cones and other New Year's Eve novelties. 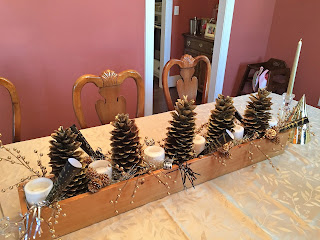 BUT . . . right in the middle of all my prep . . .actually, it was early Friday morning, I had a tiny problem.  Mark left our house while it was still dark to pick up his sister and take her to the airport.  While he was gone, I decided to have a kitchen accident.  Oh my goodness . . .I have a VERY S.H.A.R.P. grater and . . .without being too graphic, let's just say that I injured myself.  I was here by myself and couldn't get the bleeding to stop.  I paced the floor with my thumb held high . . .wrapped in bandaids and paper towels (with pressure).  Mark got home from the airport and hadn't had any coffee yet and did not really want to deal with this (we had words . . .and I cried when he said I had to go to the Emergency Room -- too many germs people!!!)  Unbeknownst  to me, Mark was texting with one of our very favorite doctors about something totally non thumb related!  His office was closed that day but he said we could come over and he would take care of me.  Y'all - I am so grateful for our people - our friends - the body of Christ.

I am steri stripped back together.  What hand?  My right one, of course.  I am one of those people whose left hand is useless . . .USELESS!  Over the last couple of days, I have learned that my left hand will do all sorts of things when necessary!  I have also learned that disposable plastic gloves are a girl's best friend! 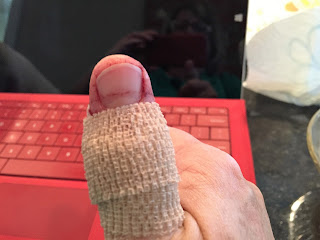 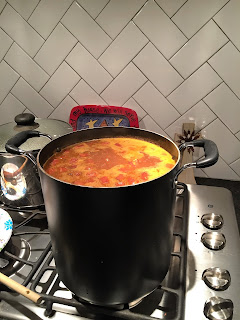 For Christmas, Emma (yes, she is only 9 months old!) gave a book to Mark . . .all about making bourbon cocktails.  Mark set up a bar.  He made a simple syrup and had all the ingredients ready to go.  It was quite entertaining! 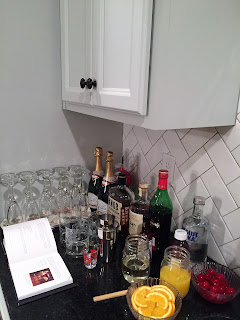 See how pretty the centerpiece looked that night.  I took this before lighting the tapers.  I was a little worried that the pine cones would catch on fire but I kept a close watch on them! 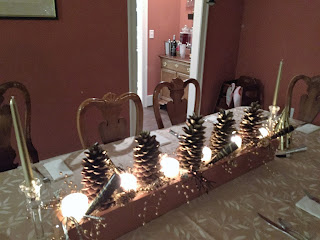 This was another entertaining portion of New Year's Eve.  George gave this "tool belt" to Mark for Christmas.  I had no idea that it was actually a beer belt so I was just as surprised as our guests when Mark came in from the garage!  I'm laughing as I type about it because it was so funny.  (He was not drinking all of those - he was offering the selection to our guests!) 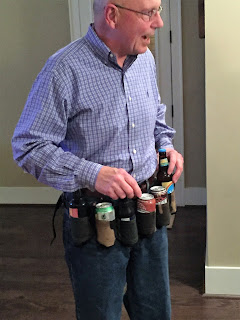 We were still sitting around the dining room table when someone realized that it was almost 11 Central time . . . which meant it was almost midnight on the East Coast.  We ran in and popped open the champagne and poured everyone a glass and counted down with the folks on Dick Clark's New Year's Rockin' Eve . . .along with the crazy feather coat/jumpsuit wearing/lip syncing star.  We laughed at the fact that everyone hung around long enough so that when they arrived home, it would be midnight and they could go to bed!  We are getting old! 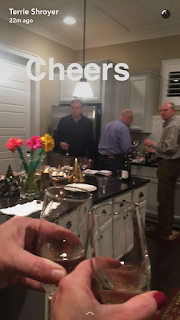 Mark and I stayed up until about 1:00 - cleaning up the kitchen and watching TV/reading.  I guess we were still wound up from the evening.  Thank goodness, we didn't have to be at church until 11:00 today.  I got up and emptied the dishwasher and reloaded it and ran another load this morning before we left for church. 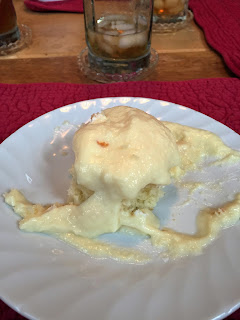 On Christmas, Grandmother (my mother-in-law) always makes a coconut cake and custard (Mark calls it cake gravy).  She made it and took it to the big family party on Christmas day night.(pictures of that to come soon).  Mark complained about not getting enough (I didn't either!!).  She made a small one for us to have at lunch today.  It was delicious.  We were taking pictures and sending the pictures to our nephew, Thomas, to make him jealous. 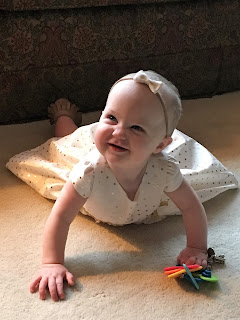 ONE of the very best parts of this year, was the arrival of this sweet baby girl.  She has on her fancy New Year's  Day dress!  She was looking at Laura and  had her nose all scrunched up!! 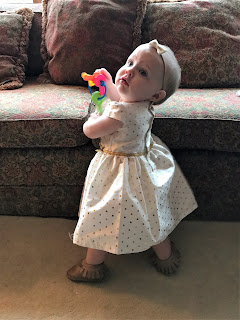 She was so cute today!!

Did you have a good 2016?  Are you looking forward to 2017?  All day, I've been thinking about the sermon from this morning.  One thing really stood out to me - resolutions are all about us - what can I do?  what can I change?  Repentance is all about God - what can he do?  What is he doing in our lives?  The focus shifts from "I" to "God" - big difference, isn't it?

It is a new year.  I haven't made any resolutions this year.  I have thought about making some - maybe about the fact that I would like to be healthier, lose some weight, be a better friend, be a better wife and mother.  Instead, I think I'll just ask God to forgive me for what I've done and to forgive me for what I've left undone . . . and ask him to guide me each and every day to do what HE wants me to do.  A friend says that we should pray "so order my day, Lord."  Maybe that is how I'll pray at the beginning of each day in 2017!!