On Tuesday afternoons I work from home preparing for our Tuesday night Young Professionals Group.  My phone rang today and it was our friend, Vonde McKay.  She called to tell me that Charles had died and to ask if Mark (and George) could come and be two of the pall bearers on Thursday.

Just who are Charles and Vonde?  They are our friends who live in the same town where our farm is located.  When the kids were little, Mr. and Mrs. McKay were like a second set of grandparents to Glenn and Laura.  The four of us would go down for the weekend and Laura and I refused to stay in the trailer so Mrs. McKay would fix up the guest room for us.  Glenn and Mark would stay up at the trailer (this was after the original farmhouse burned back when Mark and I were dating and before Mark and George and Roger bought the "new" farmhouse).

On Saturday morning, Mrs. McKay would fix breakfast and after breakfast the guys would go off and do guy stuff and Laura and Mrs. McKay and I would hang around the house and do girl stuff.  She kept dress up clothes and Barbie dolls for Laura.

She would always cook a farm lunch for us -- you know? Cornbread and peas and other veggies were staples at her table.

Over the last few years, Mr. McKay's health has been precarious at best.  He needed some major surgery a few years ago, and our friend, Mitch, was able to get him in with a specialist at UAB.  He was better for a short time but then his health began a slow decline.

He was 85 years old when he died this week but in my mind, they are still about 60 years old!!

When Glenn was about 3 years old, he LOVED to fish (still does).  Mr. McKay told one of his daughters that he would give her $1000 if she would give him a grandson like Glenn :-) 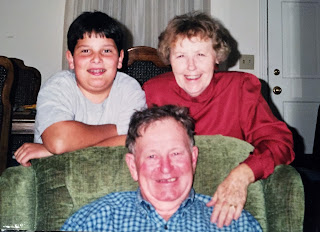 Glenn and Mr. and Mrs. McKay 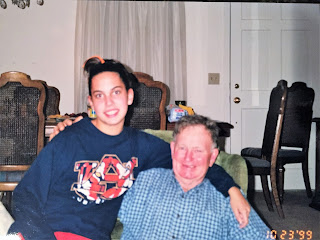 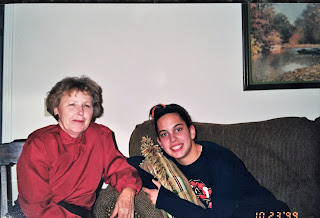 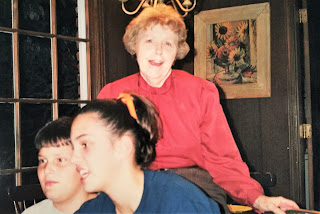 Mrs. McKay had a new computer and the kids were playing! Sweet memories!