This is the most random post EVER. Yeah - I've said that same thing before. 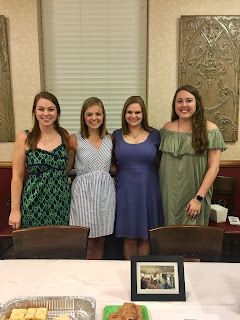 Last weekend was Grow Sunday at our church. The kids have Welcome Back Sundae and they meet their new sunday school teachers and have ice cream sundaes. The adults have a "ministry fair" of sorts and sign up tables for fall Bible/book studies. 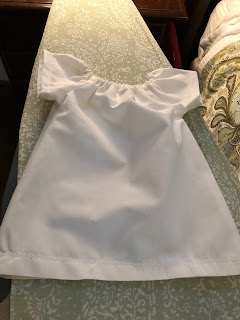 I finally finished one baby bereavement "mock up" but I'm not happy with it. You can't see but there is a decorative stich for the hem. I think it needs tiny buttons down the front or some flat lace on the sleeves - something to make it special but could be worn by boy or girl. To be honest, I hope we NEVER need another one of these gowns - ever. 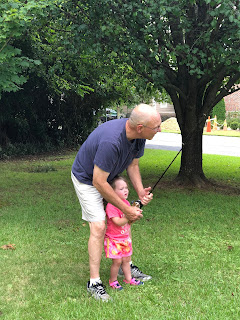 Pops had the baby girl out in front of his momma's house and was teaching her all about fishing! 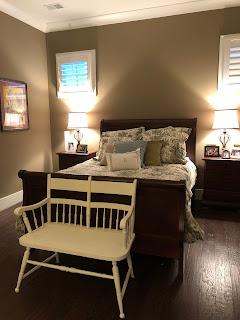 I painted the bench with a cream chalk paint. I used Rustoleum spray chalk paint. The bench was originally red. It took 6 cans of paint and I ended up with a cyst on my trigger finger! 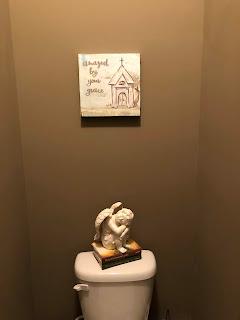 I bought a cute print at the Southern Living Store in Huntsville . . . and yes, that would be a potty in the picture . . .Why not have "amazed by your grace" hanging over the potty? 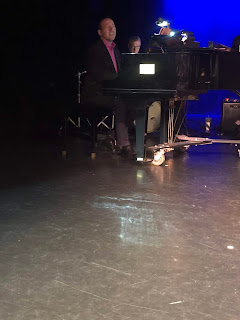 The piano player above was amazing - he was as entertaining as the show we were attending at the Homewood Theater. The reason I took the picture is the plaque on the side which you can't read but it said something like, "in loving memory of Linda Whitmire." We knew Linda (and her husband Cecil) many many years ago. Mark knew Cecil through work and we even travelled to Hawaii together. Cecil and Linda were the driving force behind saving the Alabama theater and Cecil would play the organ at the Alabama as it rose from below stage. It just gave me a sweet tug on my heart to see her name. They are both gone now but definitely not forgotten. 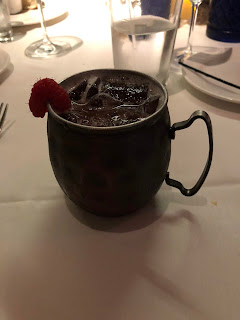 This past week was Birmingham Restaurant Week where local restaurants offer a great deal at lunch or dinner. They have a Restaurant week menu that showcases a few of their most popular dishes. We at Perry's. I had the Berry Perry Mule and it was yummy. I also had a petite filet that was tender and tasty. Mark ordered the specialty -- pork chop . . .and I swear it was a pork ROAST. They cut three giant chops from his piece of meat and he ate ALMOST all of it that night. We will go back to this restaurant and pay full price!! 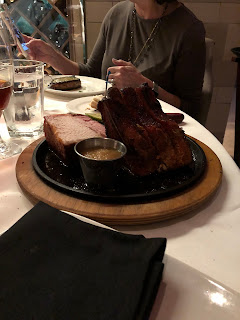 This was the dessert trio . . .which I did not eat. Our friend's daughter and son-in-law were at another table and we passed the crème Brule to him. Mark ate one of my bites and someone else at the table ate the other bite. 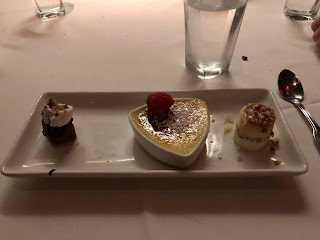 On Saturday, we went to see our daughter's school and to deliver a rocking chair for her reading space. They have CHICKENS and a garden at the school.
I love the chickens!!! 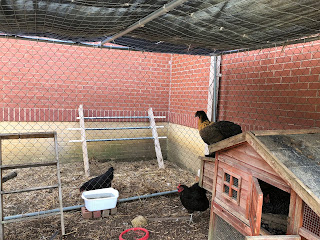 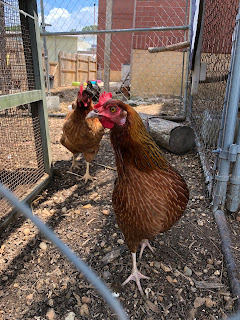 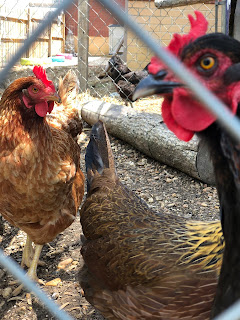 Daughter's kitty cat is a fat and happy cat named Charlie who loves to lay all the way over on his back with all four paws up in the air. He was almost in that position! 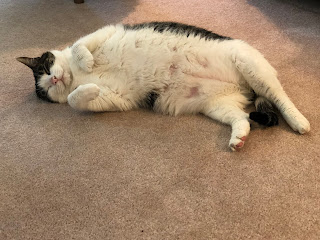 We celebrated our son-in-law's birthday and met their friends and had so much fun. We spent the night and it was really cool to spend the night at the home of your very accomplished adult daughter and son-in-law! 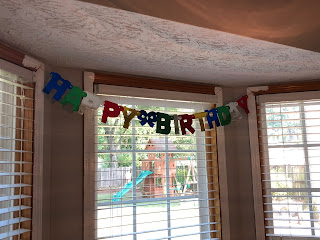 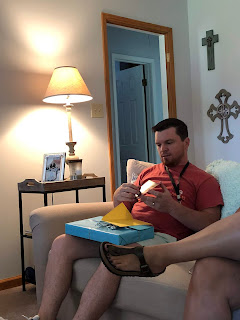 Last but not least, I worked on some of the wedding photos this week. I ordered these photo tiles from Mixtiles and they are awesome. The canvas in the middle is the one I told you about a few weeks ago but the smaller photos are from Mixtiles. Check them out!!! 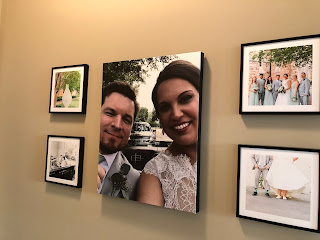 This was the wall of photos already in place. This is at the top of the stairs -- to the right is our loft area and this is the hallway to one of the guest bedrooms. 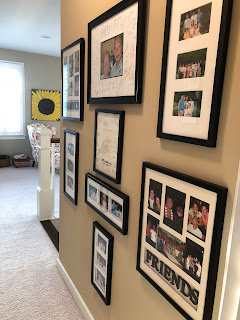 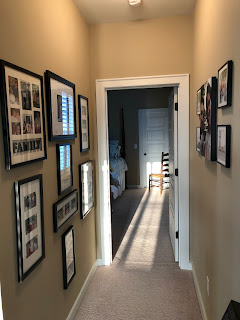