Last Thursday night, two friends and I went to see a musical.
I wasn't sure what to expect but I had a great time!

The name of the musical is The Bikinis.  The Bikinis were a group of four - two sisters and two friends (maybe a cousin??).  They told their story and sang songs from the 50's, 60's and even a couple from the 70's.  These women were amazing.  I'm not sure of their age but they sang and danced their hearts out.  I was amazed that they weren't out of breath!!  They sang great harmony with each other and were very convincing - you felt like they were truly the Bikinis!

The play was put on by C.A.T. - Central Alabama Theater - which is a non-profit group co-founded by a guy with whom I went to high school - Carl Peoples!  Carl is doing a great job!!

The play was located inside the Steeple Arts Dance Academy.  I searched on the internet and I'm not sure what church used to be in this building BUT the Dance Academy has been located there for MANY years. 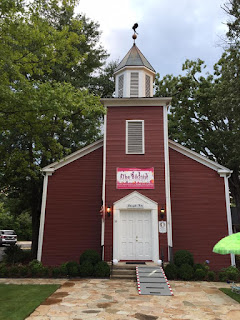 It is a small venue which makes for such an intimate setting.  I don't have a single picture of the three of us but I promise we laughed a lot!!  If I had a snapshot, all of our mouths would be laughing!  There was a group of older ladies sitting behind us and I believe they had visited the bar one time too many - they were actually whooping!  They were having a REALLY good time!

If you zoom in, you can see the cute stage.  They did an excellent job of costume changes - most of their costumes were in the beach bags hanging on the fence.  They added a hat and a leather vest or a brightly colored shirt and viola -- a new look for a new song! 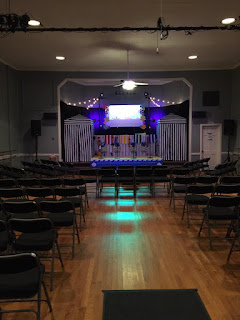 I have found myself singing some of the songs (in my head!) since last Thursday . . .and then I find myself smiling!  What a fun night!  I hope to go to some more productions by C.A.T.

Do you have live theater where you live?  Do you like to go to plays and musicals?