Join up with Joyce over at From This Side of the Pond and answer her questions!!

I don’t really feel like I “have” a summer since I work full-time.  We haven’t been to the beach this summer (but are hoping to go in the fall!).  To be honest, we haven’t really done anything to differentiate summer from any other time . . .except I’ve been to the neighborhood pool a couple of times.  I’m going to rate this summer a 4!

2. July 26th is National Aunts and Uncles Day. Did you have many aunts and uncles growing up? Were you especially close to any one or maybe all of them? Are you an aunt? (or uncle for the men who join here on Wednesdays) Share a favorite memory relating to one of your own aunts or uncles or relating to a niece or nephew who call you Aunt (or Uncle).

I had no idea that there is such a thing as National Aunts and Uncles Day!!  On my dad’s side, I had one uncle (Uncle Tal) and aunt (Aunt Polly) (and one aunt who died when I was little bitty (Lorene) . . . and she had a twin sister (Irene) who died when they were very young) and on my mom’s side, I had several but really only knew my Uncle Henry and Aunt Faye.  My mom had another brother, Uncle June Bug, and he would be at family gatherings and I really liked him, too.  There was another sister but I think I only met her once.  Aunt Faye (who was married to my mom’s brother Henry) is the only one still living.  She is extra special and I should go see her more often!!!

I am an aunt to John, Cissy, Matthew, Paul, Ben, Thomas and Grace.  John and Cissy are only 7 and 8 years younger than I am.  I did babysit for them!  I love all my nephews and nieces.  They are all as different as can be – each one is unique in his or her own way.  Isn’t that great?
I remember going to both Uncle Henry and Aunt Faye’s house and to Uncle Tal and Aunt Polly’s house.  The adults would sit around in the back yard in lawn chairs like these: 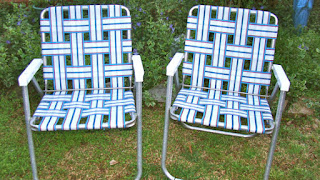 When our nephew, Matthew, was in elementary school, the kids and I drove to Louisiana (half way to Houston??) to pick up Matt.  We brought him back to Birmingham for a two week stay with us.  One night, Mark was playing poker with the boys.  He told Matt that he was taking all his money.  I think Matt called his mom and needed more money . . .but of course, Mark gave it back J  He was just joking around with Matt.  Our other nephews, Paul, Ben, and Thomas spent many hours with us during the summer.  We swam and ate and watched movies together.

My oldest nephew got mad at me quite a few years ago.  We had actually been close up until then.  He hasn’t had anything to do with me since then.  Makes me really sad.

4. When were you last astonished by something? Explain.

I'm going with the current election season and will leave it at that. (I copied and pasted that sentence from Joyce’s responses because she hit the nail on the head.  I just can’t . . .

5. Surf board, paddle board, ironing board, Pinterest board, score board, clip board, bulletin board...which board have you most recently encountered?

Ironing board!!  I was on an ironing kick this weekend and ironed about 25 pieces of clothing!!  Mark is shopping for a fishing paddle board.  He has researched and researched.  He loved using Phella's but it won't work for fishing! 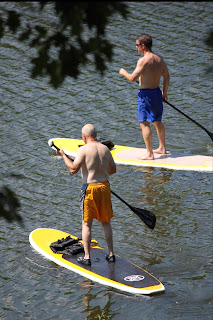 6. What's your favorite story from scripture? Why that story?
I can’t pick just one.  I do love the story of Esther – for such a time as this!!  I also love any of the stories in the New Testament – especially if we visited the “site” in Israel.  The scripture has come alive for me since that trip.

7. If you were to travel from the east coast to the west coast in your own country, which five cities would you most want to see?
I want to go to all 50 states and visit a few cities – may not happen in my lifetime! I’m going to pick cities I haven’t visited . . .so, I would love to go to New York . . .and Chicago. . . Ely, Minnesota . . .San Francisco, CA . . .and Fairbanks, Alaska (I desperately want to see the Northern Lights!!)

8. Insert your own random thought here.
Our Sunday School class is very active in different ministries.  One of the ministries we support is Restoration Mission and Dream Garden.  We take up food for the food pantry and some of our members go and do all sorts of things!  Terrie has been working with some of the kids this year and we just had a Bazillion Book Drive.  Terrie has been organizing the books on the bookshelves and wanted something to “dress up” the space.  I created a book worm (get it – worm . . .dream garden . . .books??) using my silhouette cameo and I cut out letters – “so many books so little time” (spread out on my office floor!).  It was a fun project and since it was “work” related, I was able to work on it during the day while Brian was out of town.  Do you have a favorite ministry/charity? 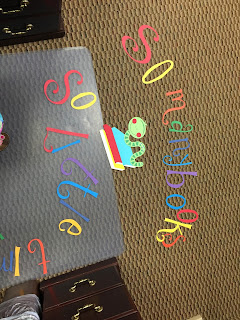